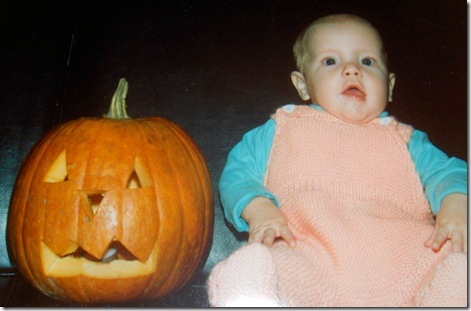 Pumpkins are pretty popular this time of year so I thought a “pumpkin week” would be appropriate.  I suppose I should begin this post with a confession – I hate pumpkin pie.  I have this thing about texture, you know?  Love the taste of bananas, can’t eat fresh ones because of the stringy texture.  It’s the same with pumpkin.  Love the taste but can’t stand the texture in pumpkin pie  Despite that, I still have my cravings for the spicy taste of cinnamon and nutmeg spiced pumpkin goodies each fall and I still do my share of baking pumpkin pies for others to enjoy!  OK OK, one more pumpkin confession.  When I was in university, one summer I returned home to London, Ontario and worked at our local amusement park Storybook Gardens.  My job?  Well, I was Peter Peter the Pumpkin Eater’s wife and yes indeed, they placed me in a pumpkin shell…a giant pumpkin shell that served as a snack bar/souvenir stand.  The worst part wasn’t actually that I was stuck inside a pumpkin shell all day…it was that the dang peacocks inhabiting the park seemed to have a great fascination for ice cream (my number one item for sale) and they were constantly jumping up on the counter, squacking loudly, and attempting to peck at my hands trying to get to the ice cream.  Ahhh, memories! 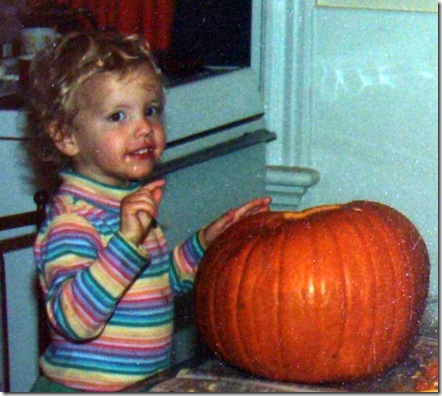 A Little Pumpkin History:
Pumpkins and other varieties of squash were present and being farmed by Native Americans/Canadians in North America long before European explorers set foot on the continent.  Along with beans and maize, they made up what was known to Native Peoples as the Three Sisters.  This phrase was used to describe a complimentary relationship which existed among the three plants when they were planted together.  The corn would act as a trellis to support the bean plants while the bean plants added nitrogen into the soil necessary for the corn to flourish.  The vines of the bean plants would wrap around the corn plants and help hold them safe and steady on windy days.  The pumpkin/squash plants would then protect the shallow roots of the corn and help deter weeds and hold in moisture.  By utilizing such a planting method, all three crops were far more successful and once harvested, they could be dried and preserved in various ways to sustain the community throughout the long winters.  Pumpkins were prepared in many ways and even the seeds and blossoms were used.  Dried pumpkin was even ground into a flour that could be made into baked goods.  Pumpkin shells were cleaned out and dried to be used as bowls and storage containers.  The pumpkin meat once dried, could be pounded and flattened into strips that then could be used as a material for weaving into mats and other such items. 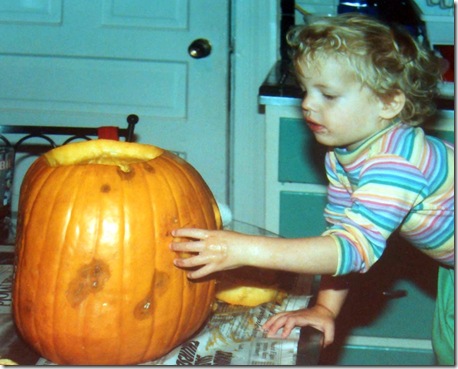 Once European settlers began to colonize North America, they learned of pumpkin from the Native Peoples and it quickly became part of their diet as well due to its versatility and the ability to store it over long winters.  As we are all reminded each year at the time of American Thanksgiving, pumpkin was served at the first Thanksgiving but it certainly was not the pumpkin pie we see as traditional nowadays.  The ingredients needed to make a piecrust were extremely scarce in the colonies at that time and they had nothing resembling an oven in which to bake a pie in.  At that time, pumpkin was generally served plain and simply boiled.    In time, Pilgrims developed a method of cooking pumpkin that involved cutting off the top, scooping out the seeds, and then filling the opening with cream, honey, eggs, and spices.  The top was put back on the pumpkin and the whole thing was put into the hot ashes of a fire.  Inside this charred blackened shell was a sweet delicious pumpkin custard and likely the precursor of the pumpkin pie we most often serve on our Thanksgiving tables.  Like the Native Americans, Pilgrims used the pumpkins for many purposes and tried to make use of as many parts of them as possible.  They added persimmons, hops, and maple sugar to pumpkin to make pumpkin beer and they even used the shells much in the way as the classic “bowl on the head” to ensure perfect haircuts.  Because of this, people of the region were sometimes referred to as “Pumpkinheads”. 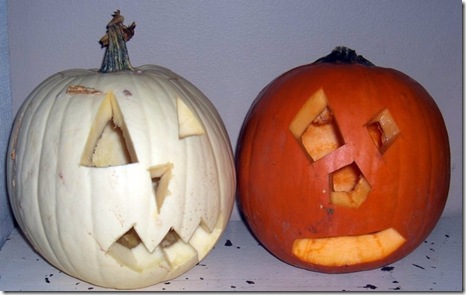 How to Choose a Good Pumpkin:  As with other fruit, you need to sniff your pumpkins!  There should be a fresh pumpkin smell.  Pumpkins should feel firm and there should be no soft spots, splits, or mould on them.  You want a pumpkin that feels heavy for its size and that has a lovely consistent colour.  The skin should be smooth and free of wrinkles.  A green stem is an indicator of a fresh pumpkin and the stem should feel firmly attached to the pumpkin. There is a difference between a good cooking pumpkin and a good Jack O’Lantern pumpkin.  In our stores, there are smaller pumpkins labelled as “pie pumpkins” which are the best for cooking with as they are meatier, have firmer flesh, and are sweeter.  Those large ones you see all over the place at this time of year tend to be too stringy and fibrous and the meat in them is usually somewhat watery and bland.

Storing pumpkins:  It is essential that you store pumpkins out of direct sunlight as just like with all fruits, the sun will simply accelerate the rate of ripening and spoilage.  In addition,  pumpkins need to be kept in a location where they will be safe from frost.  If using pumpkins as part of an outdoor display, covering them with blankets at night may be sufficient in protecting them from an overnight freezing.  Pumpkins can be stored successfully inside your home for a few weeks but room temperature is too warm for long term storage.  For longer storage, they need to be kept in someplace cooler like a cold cellar or a barn or even a covered porch.  Pumpkins should not be placed directly on hard surfaces – use something like cardboard underneath them to cushion them.  A loose layer of straw over the pumpkins will help much in the way that the blankets do to protect them from freezing and you should place the pumpkins in a single layer to allow air to circulate freely around them.  Kept properly most varieties of pumpkins will keep for 3-6 months if you can keep the mice away from them!  You should check on these frequently in case any of them do begin to spoil sooner than expected so that you can remove them and hopefully use them up quickly while still viable!

Make your own pumpkin pie spice latte like they serve at Starbuck’s http://www.thekitchn.com/thekitchn/beverage/diy-pumpkin-spice-latte-096277