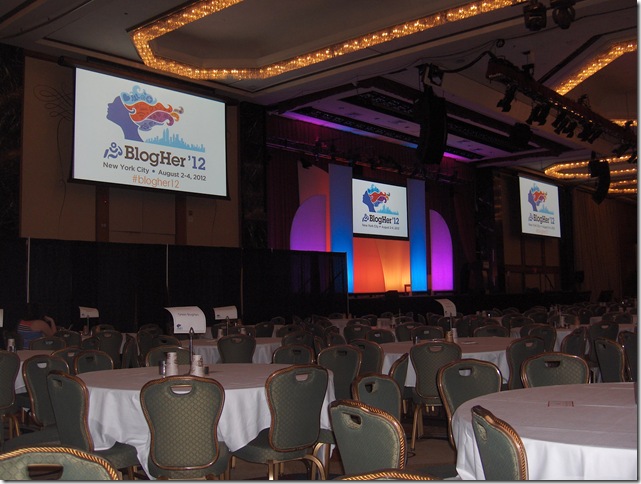 I’ve been reading a TON of posts about people’s BlogHer 2012 experiences and I love seeing the different perspectives on them.  It seems that most of the posts I’m reading fall into one group or another:  gushing positive statements about BlogHer while sometimes putting down those who have written anything negative OR those who have included negatives into their posts.  I had a friend tell me, after reading my The Good, The Bad, and The Ugly posts that the conference is “just too big. It can’t please everyone”.  I also had a stranger tell me to “quit whining and stop trying to spoil the experience for others”.  Well, here’s what I have to say to all that.

Yes, my friend is right on all counts.  A really large conference like that cannot please everyone.  Let me just clarify though that I didn’t expect it to.  I wasn’t looking for perfection and I understand completely that there are always going to be things at such conferences that I might be a bit disappointed in or that I might think, “they should have done this differently”.  I’m not one who gets all worked up about such things and my posts were not an expression of “this conference was a huge failure and how dare they waste my money like that”.  My posts were simply me stating what I liked and what I didn’t like.

Did I experience some frustration while at the conference?  Sure I did.  I was exhausted, I’m used to a much quieter environment, and I have longterm health issues that make it harder to cope with some of the frustrations and bounce back as quickly as perhaps some others.  Maybe being nearly twice the age of so many attendees also played into this.  That being said, anyone who saw me at BlogHer 2012, saw me laughing.  They saw me hugging my friends, old and new.  They saw me having fun.  I was not miserable.  I didn’t walk around in a constant state of crankiness.  There were moments of frustration but I am all for finding the best in a situation and making the most of it.  And if my frustration at a certain situation grows to the point where I feel like I’m going to start acting cranky, I am proactive.  I don’t sit there and whine and complain on and on.  I take action even if that means removing myself from the situation and finding something else to do. 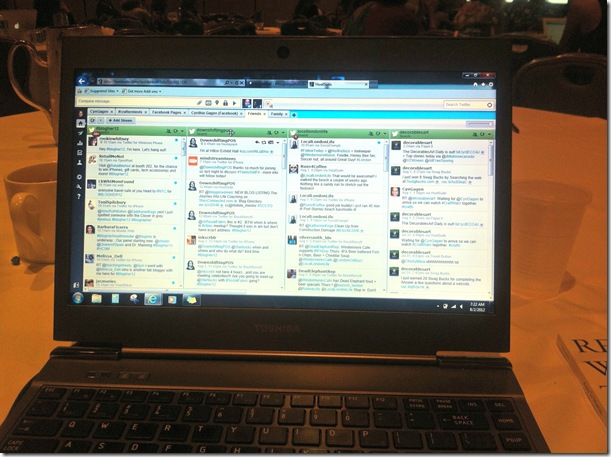 At a session that’s not meeting your needs?  Leave and go to a different one if you can.  Or go back to your hotel room and get caught up on some rest or some social media.  Or head to the Expo Hall and chat with some of the brand representatives.  At a party that isn’t really your thing?  Do what I did and just leave the party.  Clearly there were others really enjoying those same parties so who am I to say that it should be changed?  Finding yourself encountering one frustration after another and realizing that exhaustion is not helping you in letting it just roll off your back?  Well that was me by lunchtime on Saturday.  Did I stay there and allow myself to become grumpy about it?  Nope.  I grabbed my friend, hopped into a taxi and headed down to South Street Seaport for some fun out in the city.  Some time away from the conference and the frustrations I was encountering at that time gave me a much better perspective on the whole thing.

My point in raising the negatives about the conference is first of all, honesty.  I would not want someone to read only the positives and attend BlogHer 2013 with realistic expectations.  If you’re going to go to a huge conference such as this, you need to go into it with your eyes wide open.  You are spending a lot of money to go and you should have a good idea of what you’re spending your money on in advance.

I also think that after such an event, it’s important for people to share their feelings, both positive and negative.  It’s important feedback for the organizers of the event.  They NEED to know what people liked and what they didn’t like.  How else can anything be improved upon without such feedback?  I didn’t know before I attended that BlogHer tickets never sell out.  I assumed, as with many other conferences, that there is a cap on how many can attend but that’s not the case with BlogHer.  This, to me, makes it even more important for us to share what worked and what didn’t.

It is my honest opinion that the BlogHer leadership was not as well prepared to handle attendance of over 5000 as I think they should have been.  I want them to know the problems we encountered because now they have a year to try to work out some of those logistics and improve on it for next year.  Being at a convention centre instead of a hotel may in itself solve some problems but hearing from us is crucial as well. 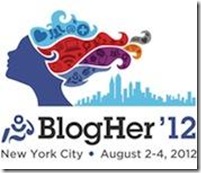 Another reason I had for writing these posts was entirely personal.  It was me doing my own debriefing – getting all those thoughts swimming around in my head out there so that I could really effectively process them.  And perhaps this didn’t come through in my posts but the more I processed, the more I realized just how much value I had received at BlogHer 2012, the more I realized that the good did far outweigh the bad, and the more I was able to let go of the one moment during the conference when I actually felt out and out anger (which, of course, could have coloured some of the rest of my experience) – by the way, that moment had to do with the way I was treated with regards to attending the President’s address.  After reflection, that moment as part of the whole BlogHer experience was small and inconsequential.

Finally, by working my way through my experiences and emotions, I was able to realize going into a second BlogHer will be so much better even if the BlogHer team changes nothing because I am now forewarned and forearmed.  I have a better idea of how it all works because I’ve experienced it for myself and I’ll go into next year’s conference with a better plan for myself.  This year I didn’t know what to focus on.  There’s SO much to do and it often felt impossible for me to decide just which aspect to put my attention on at that time.  Should I be in a session?  Should I be meeting brand representatives?  Should I be looking for other bloggers to connect with?  Should I be taking a break and recharging?  I wanted to do it all and I wasn’t sure which was most valuable to me at the time.  I have more perspective on that now.

There’s nothing wrong with having BlogHer cheerleaders who found the entire experience wonderful.  I’m not trying to rain on their parade at all.  But I don’t think there’s anything wrong with discussing what didn’t go well either.  We are all going to have different experiences and perspectives simply by virtue of who we are and what we bring to the event.  Then, it will differ for all of us depending on what we hoped to get out of it, what we focused our time on, and what specific experiences occurred for each of us.  If you attended no sessions whatsoever, obviously you and I are going to have vastly different experiences simply because of that.  In some cases, it can almost be like we were at two different conferences.  But that is what makes BlogHer both good and bad.  Each of us can go there and embark on different journeys through the event.  There will be positives and negatives encountered and by sharing them with each other, we can all learn and grow and it can only help BlogHer to get even better.