You are here: Home / INSPIRE / The Power of Rosa Parks 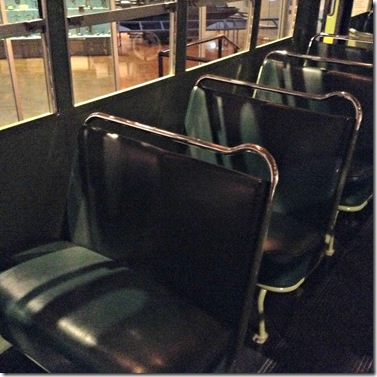 The doors to the bus were open. Surely, we weren’t allowed to enter? The bus felt almost like sacred ground and I hesitated at the door. I felt my breath catch in my throat and I could swear I felt my heart beating a little bit faster, but I stepped inside. “There’s where Rosa Parks sat”, she said as she pointed to one of the bus seats. Chills ran up and down my spine and for a moment or two, I couldn’t even speak. I have visited many historical landmarks – I’ve seen where Lincoln was shot, where George Washington slept, where John F. Kennedy worked but this had the biggest impact on my of all of them. 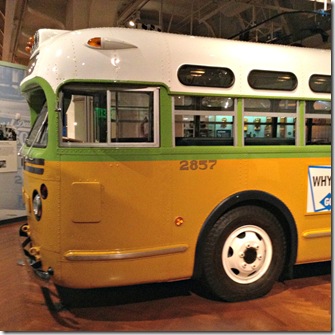 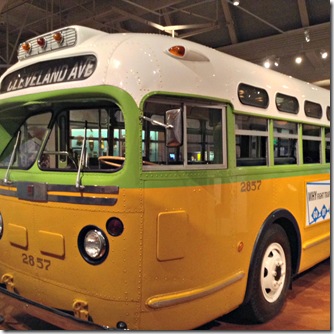 As an amateur historian, I so appreciate getting to see artifacts with special historical significance. While at The Henry Ford Museum a couple days ago, I asked one of the security guards to direct me to one of the penny pressing machines. I collect them and wanted to snag a couple while there. She said, “It’s over by the Rosa Parks bus.” My friend and fellow blogger Nancy and I looked at each other with wide eyes, turned back to her and said, THE Rosa Parks bus? You can’t mean that you have the actual bus made famous by Rosa Parks??? When she assured us that yes it was the actual bus, we simply had to find it. It was too important to miss!

As we got closer to it, tears began to well up in my eyes, Perhaps part of it was because I had just passed by the displays about segregation (I posted about them here yesterday), but much of it was that it was just so overwhelming to think of Rosa Parks and her brave actions on December 1, 1955. When you hear about someone in history books, movies, and classes, it can become too easy sometimes to think of them in the same way you might think of a fictional character. My head KNOWS that Rosa Parks existed and I knew the basics of what she did that day, but I’m not sure my heart had felt the impact of it until I saw the bus.

As we sat on the bus, the woman manning the exhibit told us more about Rosa Parks and the details of what happened that day. The feeling of awe, the chills that I felt never diminished. As i listened, I tried to imagine what she had been thinking when she made the decision to refuse to give up her seat on the bus. It disgusted me that she could even be directed to do so and horrified me to think that the bus driver pretty much had free reign to do as he pleased and very well could have been carrying a gun at the time. Rosa Parks would have known all that when she decided not to move. I tried to put myself in her place – I think of myself as someone who stands up for others who need help but my mind kept volleying back and forth between standing up for my rights (and those of every other person in that same position) and fearing for my safety. I wondered aloud, “If I had been in Rosa Parks shoes, would I have been brave enough to do what she did?” I’m still not sure of my answer.