You are here: Home / GIVEAWAYS / Itchy Dog? She May Have Allergies! {Giveaway} 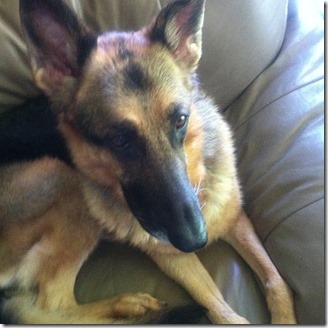 See my sweet girl Trinity? You may notice something has changed in her appearance from the photo on the left to the photo on the right.. Her ears – they used to stand up nice and straight like a typical German Shepherd but now they’re kind of….well, wonky. You see, she suffers from allergies. A ton of allergies. With the help of the vet, we’ve identified some of them: snow mould, all types of trees, grass, and pollen being some of the major ones but we think there are several more we’re not sure of yet. 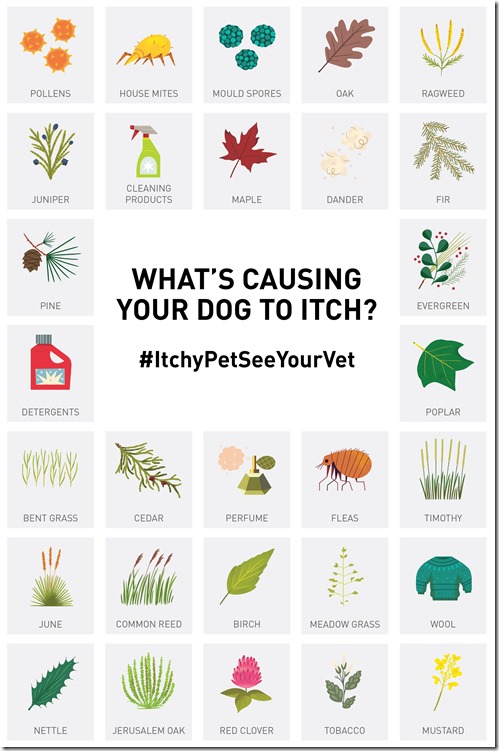 So, let’s back up a bit. How do those allergies have anything to do with Trinity? Well, one of the biggest signs of seasonal allergies in dogs is itching and scratching. For Trin, this seems to mainly affect her ears with some general skin sensitivity and itchiness occurring when the allergies are at their worst. Then she will develop “hot spots” on her skin – for her it’s usually on her belly or in her armpits. Just like her ears. those areas become red and inflamed, hot and tender to the touch. When it comes to dogs, allergens are mainly absorbed through the skin rather than their respiratory system, so these symptoms aren’t surprising given her allergies. 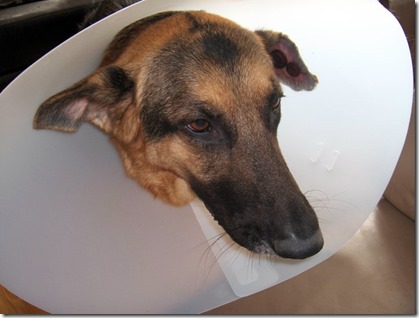 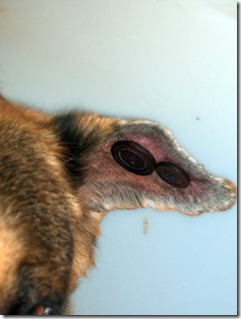 Her ears get red and inflamed, hot to the touch. No matter how hard we try to keep her from touching them, she scratches and scratches at her ears until they are raw and bleeding. I’ve often awakened to the sound of her shaking her head excessively, trying to find relief from the itch. She has caused large hematomas on her ears – so large that they needed surgical draining and as they healed, they formed into the slightly misshapen ears you see now. The photos above show Trinity following one of her ear procedures – after they drain the hematomas, they sew buttons in place to keep them from filling up with fluid again while they heal.

My nephew’s dog had similar allergies and in Daisy, this manifested as constant chewing on her paws. Despite being a white dog, her paws were nearly black from the irritation and chewing and it was heartbreaking to see how painful and sore they looked. An easy way to remember the typical signs of allergies in dogs is to think ESP: Ears, Skin, Paws. Dogs displaying any of these signs should be taken to a veterinarian to get a thorough exam and diagnosis. 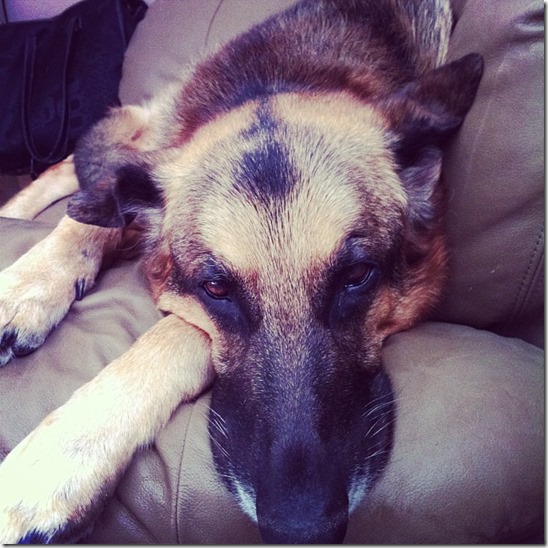 We have used special shampoo, prescription medications, sprays to soothe Trinity’s skin and ear inflammation, and veterinary exclusive pet food specially designed to address her environmental allergies. Clinical research has shown that diets formulated specifically to address a dog’s environmental allergies play a key role in restoring the skin barrier. Daisy was given allergy shots as well. Your vet is a great resource in diagnosing allergies and coming up with the best course of action in treating them.

Think your dog might have allergies too? More information can be found at the Royal Canin website or on Twitter by following @RoyalCaninCA or the hashtag #ItchyPetSeeYourVet. 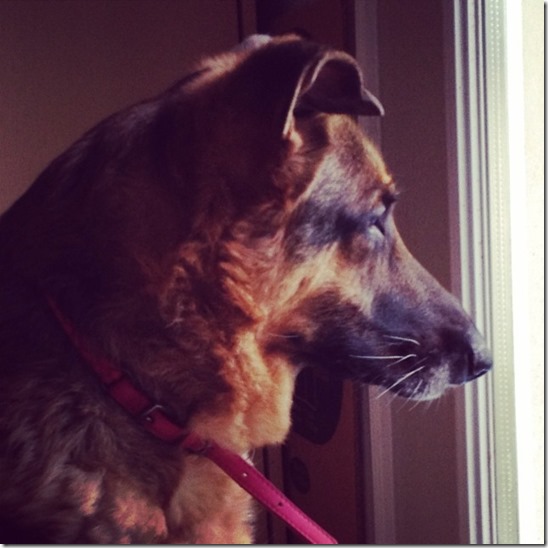 Now for the giveaway!

NO PURCHASE NECESSARY. Contest open from 12:00:01 a.m. EDT May 13, 2015 to 11:59:59 p.m. EDT May 27, 2015. Must be legal resident of Canada who has reached age of majority in his/her province of residence. Prize: $100.00 (CDN) Visa Gift Card. Selected entrant must correctly answer skill-testing question. Void where prohibited. Odds of winning depend on number of eligible entries received. See Contest Rules in entry form.

Thanks to Royal Canin Canada for sponsoring this post. Issues pertaining to my dog are very near and dear to my heart and I’m happy to share this important information with my readers.