I just love hanging out with the little ones  It’s so much fun watching them as they act out little adventures with their toys. J, age 6, really loves to play out scenarios involving every day heroes like police officers, firefighters, and soldiers.  Of course, the fact that his daddy is one of those real life heroes certainly does have an impact on his play and you can often “hear his dad’s voice” in what his toy characters are saying. C, age 4, is into anything her big brother is interested in! Sometimes, I even get asked to join in and each time generally starts out the same. We set up a roadway for cars to travel around the city, complete with the requisite road signs.  I swear, J knows more highway and road safety signs than I do! Inevitably, some of the vehicles end up in an accident. The call goes out for the police officers, ambulances, and fire trucks to appear on the scene to rescue the victims and bring them to safety.  To add another element to this scenario, sometimes thrilling mountain passes (read: my back and legs) are added to the roadway, making the rescue even more exciting. 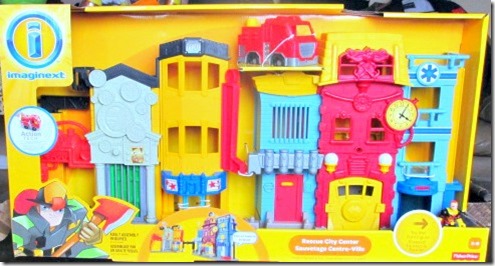 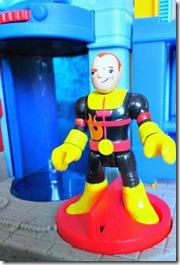 Now that we’ve discovered the Fisher-Price® Imaginext® Rescue City Center, it has added a new element to our fun. We have a police station, fire station, and hospital from which we can send out our rescue vehicles to deal with each of the roadway accidents. Not only that but it comes with a gas station, bank, and hotel to add to the adventure. The hotel has pop-up flames that we can put out with the (pretend) water that shoots out of the fire truck. The hospital, with its working elevator, gives us a place to treat our injured passengers and fix them up before sending them on their way again. The jail door and bank vault open and close and the Action Tech™ technology brings the whole thing to life with speech and sounds! The Imaginext line of toys includes the character Ed Venture in new content including Ed as dino warrior, as a fireman and as a knight!

The vision of Imaginext is “to inspire & empower kids through imaginative play that helps them build confidence, solve problems & discover who they are. It is the only brand that empowers imagination by providing preschool appropriate entry into the exciting world of action & adventure play.”  Now YOU have the chance to win some of the fantastic toys in an amazing Imaginext contest. Head over to their contest microsite and play the online game, solving clues to unlock each phase of the contest. Once you’ve solved the 9 clues to win the game, you will be entered to win 1 of 5 $300 Imaginext prize packs that include: