Hot Cross Buns are traditionally served in many countries on Ash Wednesday, Good Friday, and often even on Easter morning. They are a must-have tradition in our home each Easter weekend.

They are delicious and a great reminder of the real meaning of Easter. My version has a little twist to them, adding in the delicious taste of London Fog (Earl Grey Lattes) to them. YUM!

How did hot cross buns become “a thing”?

It said that this type of bun may date back to ancient times but legend has it that back in the 12th century, an Anglican monk decided to make a batch of these buns and mark them with a cross in honor of Good Friday.

They became more popular during the Elizabethan age when Queen Elizabeth I created a law saying that sweet buns could only be sold for funerals, Christmas and Good Friday.

There was a superstition that the buns had magical properties and so the sale of them was limited to keep these “powers” from being misused. People started making their own at home to get around the law and they rose in popularity.

It’s said that if you bake hot cross buns on Good Friday, you can hang some from the rafters of your home to ward off evil spirits in the year to come. Supposedly, these buns would stay mold-free for the entire year because it was a symbol of Jesus’ body remaining in perfect condition with no decay after his crucifixion and before his Resurrection.

The bun was to be replaced with a freshly baked one each Good Friday. Sometimes, once taken down, the buns were broken up and mixed with water to use as medicine.

Women would also bake the buns that day and send some with their husbands before heading off to sea to protect them from shipwrecks. Another legend states that a hot cross bun shared between loved ones promises friendship in the coming year. An old poem goes, “Half for you and half for me, between us two, good luck shall be.”

Don’t think you have to restrict yourself to having these delicious sweet buns only at Easter. After all, we’re not living in Elizabethan times anymore!

Double or triple the recipe. Make the recipe as usual, stopping just short of baking them. Place the unbaked buns in the freezer. Any time you are craving some, you can grab them, even one at a time and pop it in the oven. 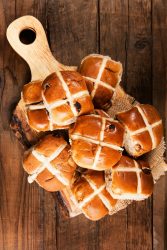 Traditional Hot Cross Buns with a twist – these sweet buns have the delicious flavor of a London Fog (Earl Grey Latte) in them.

Variations on These Buns

If you would prefer to make more traditional Hot Cross Bun recipe, simply omit the Earl Grey tea. Other changes you can make according to your preferences include:

How to Serve Hot Cross Buns

I think they’re delicious just as they are but I’ve got some other yummy ideas for you too. Cut them in half lengthwise and toast. Use butter, honey butter, apricot jam, blackberry jam, or marmalade on them. You can even use them as the bread in French toast.