This French Canadian Tourtiere is a family favorite It’s a meat pie that is one of the traditional dishes served at the feast on Christmas Eve in Quebec.

You won’t want to want for Christmas though. We like to serve this all year round. It’s the perfect comfort food for the cooler months in fall and winter.

I have fond memories of growing up in Quebec and Tourtiere definitely figures prominently in them. I learned this cooking side by side with a French Canadian chef who was a family friend.

It was a huge hit and I’ve been using this recipe ever since. It’s delicious served on its own, but if you want to take it to the next level, try my Cranberry Chutney with it.

Do note that as with my dishes like this, there are some regional differences. They all tend to have the same (or very similar) spice mixture in them – after all, what is Tourtiere without them?

Some people add other ingredients such as carrots and potatoes to their pies. This recipe is most similar to the ones you’ll find on frozen food departments of Canadian grocery stores.

So, I’m guessing it’s the most popular. And, I think if I ever tried to change our recipe, my daughter would revolt. We did try it with potatoes added last Christmas and it was delicious. She still prefers the traditional though.

I almost called this a spicy meat pie. It is but maybe not in the way you might think by that description. It’s not spicy as in hot.

The spices are more of those comfort food type seasonal spices that make you feel all warm and cozy inside. It’s like a big warm hug on a cold winter’s day – in pie form! 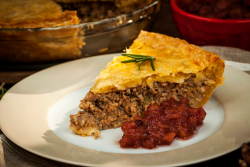 A delicious hearty meat pie with a unique blend of spices. A traditional Christmas Eve holiday favorite in Quebec!

Tourtiere is simple to make and it freezes well. We like to keep them on hand for those “I need comfort food” winter nights and have even been known to have one in the middle of summer too!