You are here: Home / TRAVEL / Road Trip Games Your Family Will Love

Have you headed off on any road trips recently? If you have, this is likely familiar. “Are we there yet?” “I’m bored!” Sigh. It can make each and every mile feel SO. MUCH. LONGER. Oh sure, we always bring along some toys, books, coloring books, and the like but sometimes, you just need to break up the monotony with some sort of active participation. Ladies and gentlemen, this week for Summer Fun Friday, I present to you, road trip games. Not only are they fun but they’re free and require no advance preparation!

Now first, it’s important to consider some safety guidelines. 1) The driver needs to concentrate on driving. For most of these games, it’s probably a good idea for the driver not to take part. 2) Kids get really excited when in the midst of a game. Again, the driver needs to be able to concentrate on driving. So, it’s important to set some ground rules (no yelling, for example) before you begin playing. 3) Have fun! These games are a bit old fashioned but they can be a lot of fun, even for the screen-time generation. 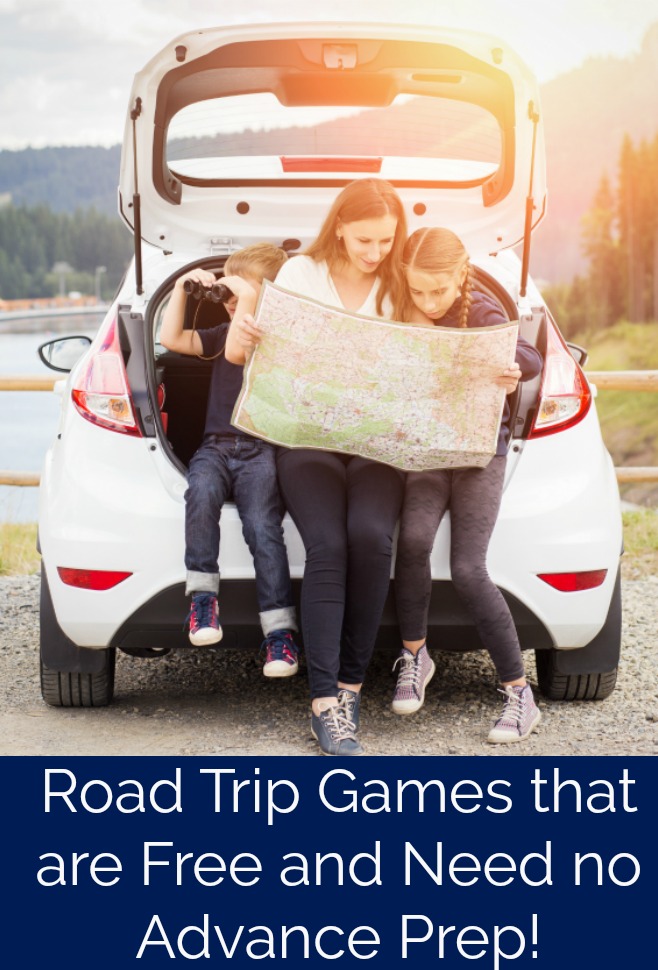 Using the mile or kilometer markers available on some highways, play a guessing game with the kids. Have them all shut their eyes. Call out to them when you pass the first marker. Each of them are to call out “Mile’s Up” (or whatever you’d like to say!) when they think they have reached the next marker. The one to call out when the car is closest to that next marker wins.

Another way to use mileage – pick an object off in the distance.

Set your trip odometer so you can keep track of how far it is while the kids make their guesses. You can even let them make their guesses right down to the nearest tenth of a mile/kilometer! Again, the one who makes the closest guess wins.

Choose a common word. Turn on the radio and listen for that word. First person to call out when they hear the word wins.

This can be done is so many ways. One way is to choose a number – 100, for example. Now, each person looks for license plates and writes down the digits they see. On the license plate BHV 406, you’ve got a 4, a 0, and a 6. The kids can simply add these digits together until they come as close to 100 as possible. First one to do so wins. OR you can decide on letting them pick 10 license plates that they see. Now they can use any mathematical functions (add, subtract, multiply, or divide) they want with the digits they find on those 10 license plates. For instance, they might choose to add some, then subtract a couple, and then multiply by the last one. The first one to get as close to 100 wins.

Pass it around to each person to add to it. The trick is that they must use something they can see from where they’re sitting as part of the story. So, it might be something like, “Once upon a time, three people were heading out on a long journey. In the distance, they saw a Denny’s restaurant. As they got closer and closer to it, they suddenly realized that they had a herd of cows following them. This was very puzzling but they decided to continue on to the mountains.” etc etc.

Watch for license plates and write down the states and provinces you see. You can just leave it up to each traveler to keep track of these and then when you stop for the night (or reach your destination) tally them up and see who found the most different locations. Or each person can claim a state or province’s license plate when they see it. For example, if you see a red car with an Ohio license plate on it, no one else can claim that same car’s license plate. To add Ohio to their list, they’re going to have to find it on another car!

Play “I’m going on a road trip (or picnic or something similar)”.

It’s that same simple game you’ve probably played 100 times before except that it has to be much faster. Since you’re on the move, the items are going to eventually disappear from view!

Yep, the old standard. This is a good one to play instead of I Spy when there just isn’t enough to spy outside your windows.

First person says a name. Next person needs to come up with another name that starts with the last letter of the first person’s name. Example: Person 1 says Cynthia. The next person says Andrew. Person 3 says Walter. Person 4 says Robert. And so on!

Okay, so when you’re driving along and see cows, what happens? Someone says, oh look cows! (Wait. That’s not just my family that does that is it?) Okay so anyway, the whole idea here is to “collect” cows. If you see cows, call out “My Cows” and count them. That is your score. (If you’re driving in a rural area and it’s feasible you could assign a side of the car to each person instead if you prefer. Child 1 gets to collect cows on their side of the car and Child 2 gets to collect the ones on their side.) Now, choose some sort of landmark that you’re likely to pass periodically. Maybe it’s a bridge/overpass. Or a McDonalds or Tim Hortons. This landmark serves as a cow eraser. So, let’s say you and I are playing My Cows. I have 3 cows and you have 6 and our landmark is Tim Hortons. If I spot a Tim Hortons before you do and call it out, I get to “erase” your cows. I now have 3 and you have 0. I win.

How to get ready for a road trip

Tips for road tripping with kids

Tips for road tripping with a baby

Previous Post: « How to Get Ready for an Empty Nest
Next Post: Weekly Summer Meal Plan July 23 »