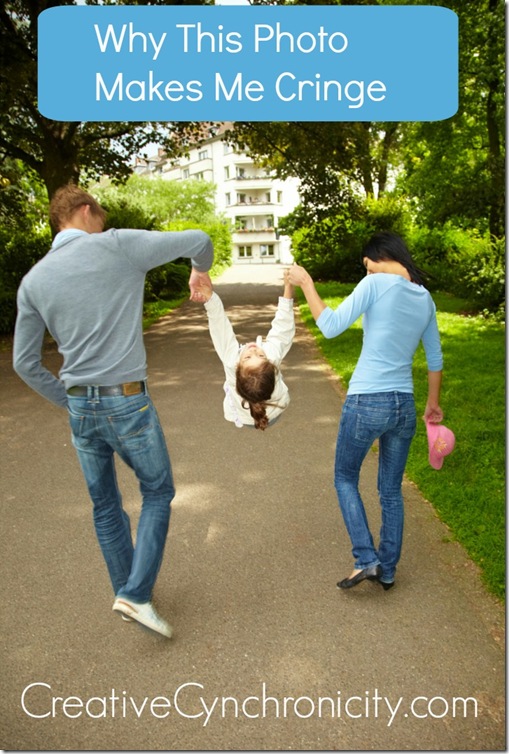 An article was shared on Facebook today and to be honest, I didn’t even make to the article because the photo (similar to the one above but only showing one adult swinging a child by the arms) made me cringe.

Holding children like this is actually REALLY BAD for kids. When you hold a growing child like that (even without swinging them but swinging them, according to the doctor I’ve seen, makes it worse) you can damage their elbows.

It even has a name. Uncle’s Elbow is what it was called when I was growing up (because they found that it often was done by unknowing uncles when playing with their nieces and nephews). Apparently it is more commonly  known as Nursemaid’s Elbow.

More than once when I was little, the doctor had to put my dislocated elbow back in place because of this. In fact, it happened often enough that he eventually taught my parents to do it themselves. It was extremely painful, although thankfully I have no memory of that pain.

To this day, I have problems with my elbows which the doctor attributes to this. I have been diagnosed with a recurrent case of “tennis elbow” despite the fact that I have never played tennis nor done any other sports where this type of injury is common.

This condition is one of the reasons I had to give up dance lessons many years ago and being a blogger and social media manager, it is something I am dealing with quite frequently again, being exacerbated by all the typing. My specialist says that it isn’t common for Nursemaid’s Elbow to continue to cause issues into adulthood but who wants to take that chance? And who wants to cause their child all that pain in the meantime?

What Can You Do About This?

You can learn more about Nursemaid’s Elbow here.