You are here: Home / INSPIRE / My Car Accident….or Don’t Use Your Cell Phone While Driving

No, I wasn’t the one using the cell phone. In fact, I’ve NEVER used mine while driving because I know the dangers of it all too well. 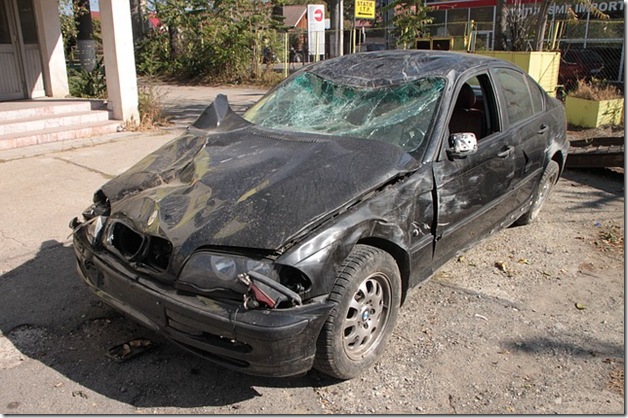 FYI – this is NOT my car. My car looked much much worse.

A friend was just asking me about the car accident that happened to me and my family in 1998 and I thought, hmmm, I don’t think I’ve ever blogged it. Oh I know I’ve mentioned that I was IN one but not how it happened.So here goes.

It was nearly Labour Day weekend. We were camping just outside of town – one last big hurrah before the school year started. I was a teacher and had to go into town for a pre-school year meeting. My mom and daughter were coming with me to help me set up my classroom. We weren’t far from the campground when we had to stop and wait for oncoming traffic to clear so we could make a left turn onto the on-ramp of the highway.

I glanced up into my rear-view mirror just at the last minute – just enough time to see the SUV as it rear-ended my car. My mom and daughter were caught by surprise which was probably for the best. I remember later my mom saying that it was so loud that she thought the car had exploded. The woman who hit us was doing 110 km/h (remember we were at a complete standstill). She sent us flying from our lane, across the other lane, and into the ditch on the opposite side of the road, the car spinning around several times until we finally stopped facing the other direction from where we had started.

We were lucky. I know, I know this doesn’t sound like it but bear with me. At that very moment that she hit us, the oncoming traffic cleared. If it hadn’t, it would have been a multi-car pileup. We very likely wouldn’t have made it out alive, being the middle car in that scenario. It’s a blessing that didn’t happen. 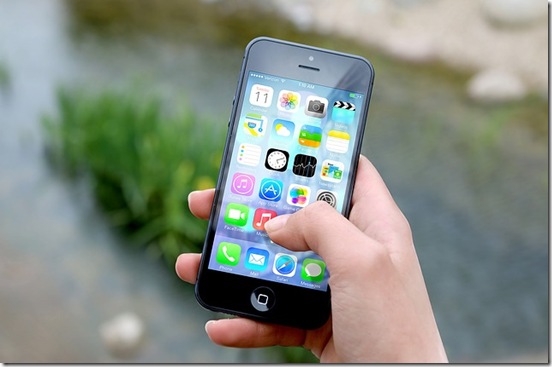 It turns out that she hit us because (as she herself admitted), she had been talking on her cell phone, dropped it, and had bent down to retrieve it. She also told us that she didn’t even see us until the very moment when she was hitting us. Because of that, she drifted over the center line and hit us more on my side of the car than the other. This was another blessing.

My daughter was sitting in the backseat behind my mom. After the accident, there was no backseat left behind me and if my daughter had been sitting there, she would have been crushed. Had she hit us one centimetre over from where she did, she would have hit the gas tank and the car probably would have exploded. Blessing.

Our seatbelts in the front didn’t lock like they were supposed to. My mom was thrown into her door, seriously injuring her shoulder. I was thrown chest first into the steering wheel. Both of our seats broke and ended up flung back, as if we were reclining. My daughter’s knees were smashed against my mom’s broken seat and she still deals with the pain and their lack of full function since then. BUT in all of this, there were blessings. Because all of that, every last little bit of it could have been SO MUCH WORSE.

The car accident was a horrible experience. I’ll never forget the moment when the car stopped spinning. I glanced to my right and could see that my mom was okay – injured but okay. I tried to move my head to look in the backseat to check on my daughter and couldn’t. I tried to form words and couldn’t. All I could feel was searing pain throughout my body and a tear as it trickled down my cheek. I remember so clearly that feeling of panic as I waited for my daughter to make a sound so I could know that she was still alive. That moment felt like it hung there, suspended in time for hours. 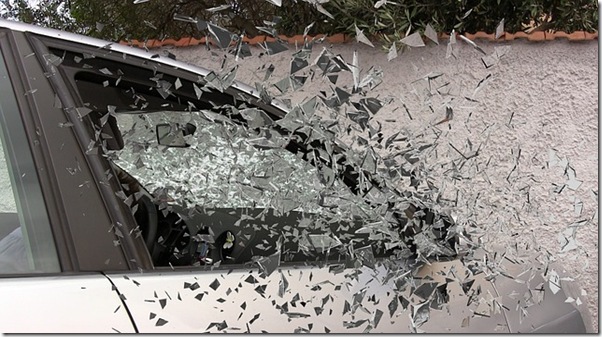 Then there was that moment….it was getting harder and harder to breathe and the only thought going through my head was, “I can’t die. I’m a single mom. My daughter needs me. I hope the ambulance gets here soon. I”m pretty sure I need to be intubated” (I watched way too many hospital dramas on TV!). Oh and by the way I didn’t need to be intubated. It was a combination of shock and the blow to my chest from the steering wheel but still, it was a terrifying moment. Another scary memory – picking tiny shards of glass out of my scalp and eyes for days after the accident. None of those frightening moments will ever leave me.

But here’s the most important message you need to take with you – assuming you made it this far through this longwinded post. It has been nearly 17 years since that accident and we are all still alive. We all deal with daily pain and physical limitations but we all deal with it. We are all still functioning. My mom at age 82 (it’s her birthday today) is still going strong. She JUST retired a few months ago but has a very active volunteer and social life. My daughter is married and teaching in the UK. I’m here. And I’m pretty darn happy to be here.I had to give up my profession as a teacher which I loved but I LOVE what I’m doing now too. I’ve been able to see my daughter grow up. I’ve been able to see my daughter thrive.

From that day on, I have not taken a single day for granted. I have not gone through a single day without smiling and laughing and loving life. For every single challenge I have faced because of the accident, there have been 5 blessings.

Previous Post: « My Favourite Valentine’s Day Gift Ever
Next Post: Top 10 Ways to Connect with Your Family and Friends Using OneDay – Now Available for Android »