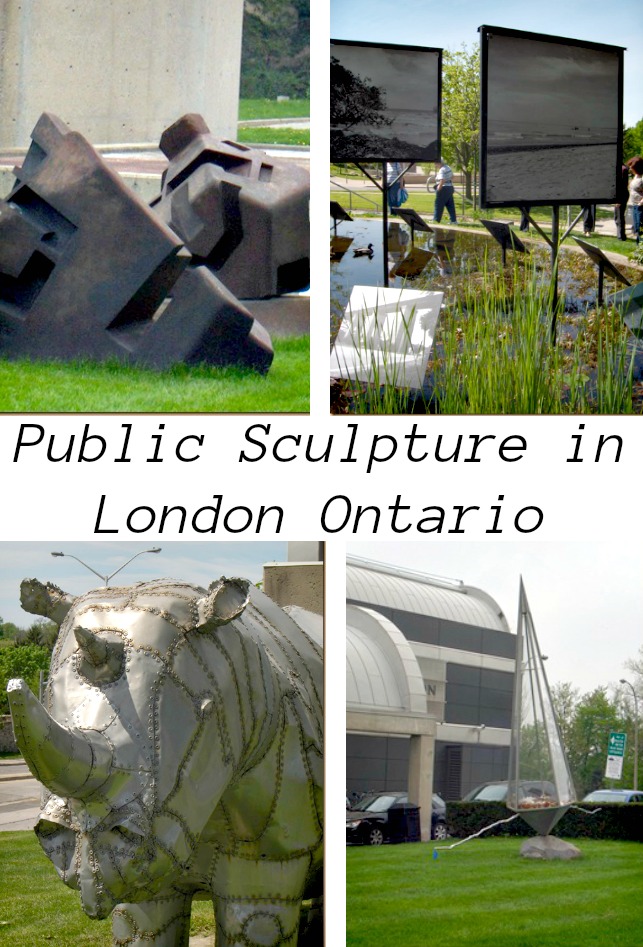 Periodically, Museum London leads some art and history hikes here in the city. The topic this time was Public Sculpture in London Ontario. Public sculpture describes a couple different kinds of works:  it can refer to publicly owned pieces; that is, pieces that are owned by public entities (paid for by tax dollars, owned by the government). Or it can refer to pieces that have been purchased or commissioned by corporations and placed in public places. 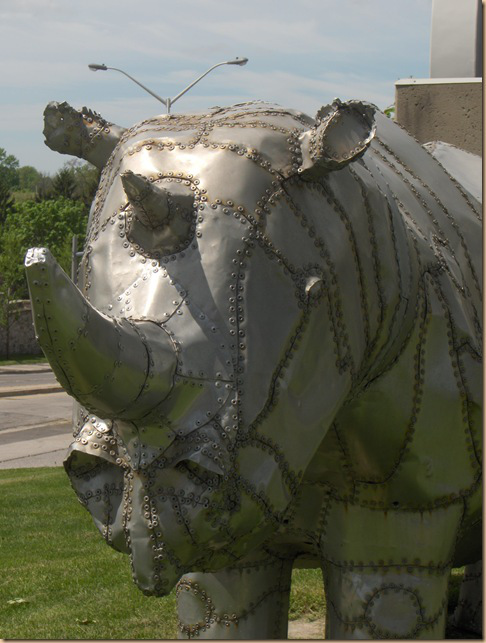 The tour began with sculptures right on the grounds of Museum London.

This piece is called White Rhino by Tom Benner (a local Londoner). Benner is very interested in animal life and in conservation of nature. He created this piece to represent the endangered white rhino. It’s meant to bring attention to endangered animals and cultures. He wanted to represent the our cultural diversity and the importance of recognizing different cultures so that they don’t become endangered. 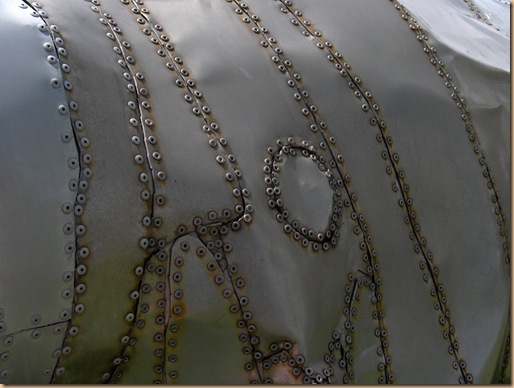 White Rhino is hollow, having a frame of wood covered with aluminum.

Originally it was designed to go inside and had been screwed together but when the decision was made to place it on the front lawn of the museum, the artist removed the screws and replaced them with rivets.  There are 16,000 rivets in this piece.  Benner visits his piece quite often (he still lives in the London area) to check on it and make repairs as needed because unfortunately, it has suffered from scratches, dings, and other damage due to people attempting to sit on it or covering it with graffiti.

This sculpture is called Lambeth Way and was created by Patrick Thibert (Canadian) in 1979.

It is made of steel and was painted to help prevent corrosion.  It is a formalist piece in that it focuses on the essence and parts of the item it is portraying; in this case, a table.  I guess I’m not the only person who thought it looked like “an artsy bike rack” because the museum says they’ve had problems with people hooking their bikes up to it or parents allowing their children to get on it, thinking it’s some sort of a climber.

Thibert chose to paint it black rather than another colour because he felt that it would remove most of the context of colour. This would allow people to read something into it that might alter their perception of the piece (ie using red and evoking an idea of anger).  It was named Lambeth Way because Thibert lived in Lambeth (used to be a small town but is now incorporated into London) while working on it.  It could be seen from the highway and attracted quite a bit of attention during its construction. 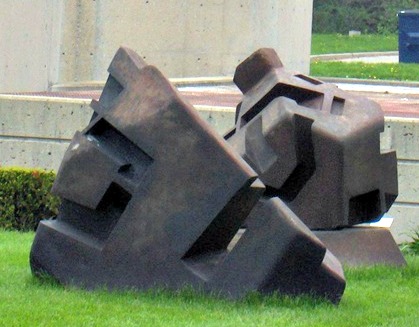 This is called Two Units and was made by Walter Redinger (Canadian).

Although even close up it looks like it was made of bronze, it is in fact created from fibreglass. There was no way that Redinger could get the angles he was looking for out of a metal.  He was inspired by music, pianos. automobile parts and more when he was making this. 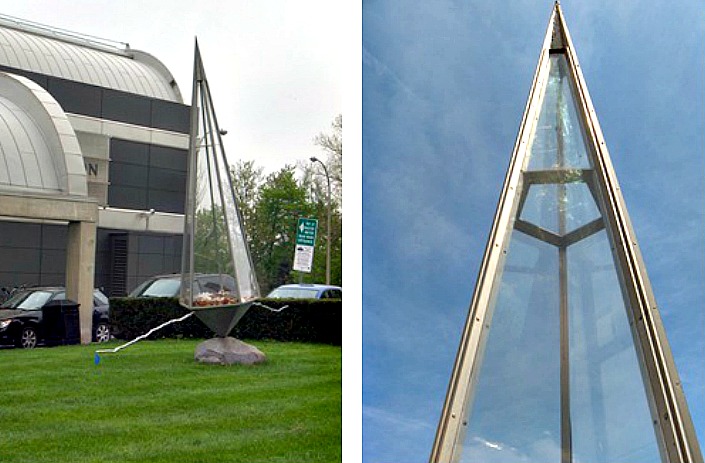 It was originally in the Toronto Sculpture Garden before being moved to Museum London.  The base of it is a granite rock to ground it with an organic element that symbolizes the foundation of the earth.  The main part of it is an aluminum structure with something similar to plexiglass in it.  It’s five sided to represent a crystal.  The branches coming out from it (which, by the way, had a couple of real birds perched on them when we first approached it) are made of metal from the Pilot missile that was melted down and recast. 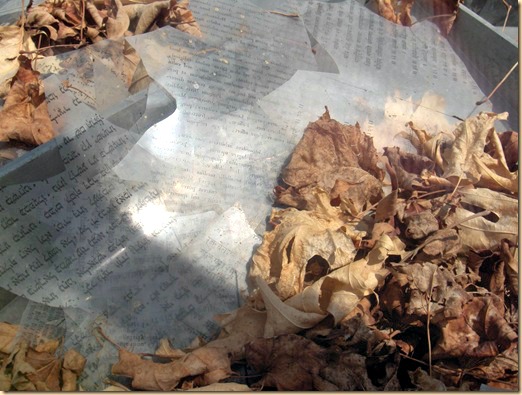 Inside the “crystal” are real leaves preserved somewhat in wax as well as some leaves made of mylar. On the mylar leaves are poems and prayers written in about 100 different languages by elementary school children from Toronto.  This whole piece is made so that it can rotate on its base and it will turn in the wind. The idea is that the crystal and granite grounds the prayers to hold them within the earth. At the same time, the piece turns like a Tibetan prayer wheel sending the prayers up to Heaven.  Honestly, I didn’t dislike this piece before today but after learning the story behind it, I am absolutely enamoured with it! 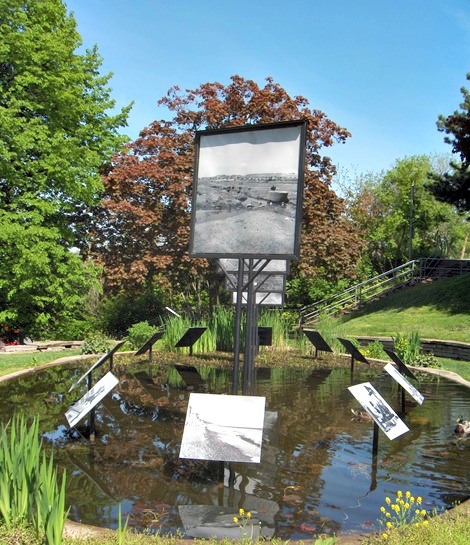 Ron Benner’s As the Crow Flies is an ongoing body of work that includes a number of different pieces.

This includes this pond in the Wolf Sculpture Garden overlooking the forks of the Thames River.  Ron Benner is a local Londoner who also happens to be Tom Benner’s brother.  He has a strong interest in botany and in 1989 he embarked on a journey along the 81.14 meridian leading from London down through places such as  Port Stanley, Ontario, Cape Sable, Florida, and Bay of Pigs, Cuba.

Benner connected very strongly to indigenous people and the ways in which they interacted with the earth. He appreciated the way they worked to cooperate with it rather than force their will over it.  He has become very aware of the many indigenous plants that our earth is losing. This piece is meant to bring awareness to this. 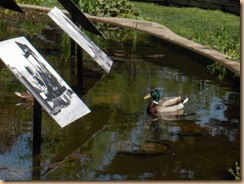 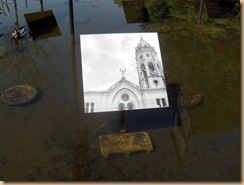 The pond is filled with Benner’s photographs of each of the places he visited along the meridian.

One end of the pond begins with Port Stanley, Ontario and extends in order along the meridian from there.  Benner maintains the pond himself with help from some local companies and students from University of Western Ontario.  Each year, the pond is drained for the winter and then each spring, it’s refilled. Benner himself begins planting new plants in it, indigenous from each of the zones along the meridian represented by the photographs.  It has become home to various water fowl that fly in and fish that Benner places in as part of the pond’s ecosystem.

In Part 2 of this tour, I’ll be sharing with you sculptures from around the downtown core.