I went on an adventure today.  A few weeks ago, I attended the opening weekend of The Met, weekend artisans market in downtown London, Ontario.  I had parked under the Covent Garden Market and as I walked through the walkway (basically an alley that’s been turned into a pretty courtyard-like space) to get across the street to The Met, I got the chance to look at some really pretty murals depicting familiar sites from our city on the walls of the buildings there.

These murals are found in the walkway leading from Covent Garden Market (Market Lane) to Dundas Street.

I had seen them before in passing but this was the first time I had been able to see them in any great detail.  So, when I saw that Museum London (our local art museum) had scheduled an art hike focussing on murals in the downtown area, I had to attend.  It was fascinating!  Not only did I get the chance to learn more about those murals I had seen a few weeks ago, but I saw many more I had never even known existed. 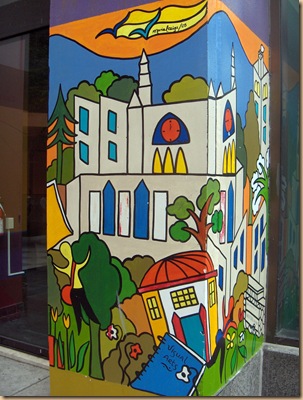 A mural is defined as a piece of art that has been created directly on a wall.  We saw murals that had been done both on the outside of buildings as well as on interior walls of some buildings.  We also saw some that stretched the definition of murals slightly, as you’ll see later.

Directly across from the previously shown murals in the walkway from the market to Dundas Street, is this painting.  This one doesn’t entirely fit the strict definition of a mural because although it is hanging on the exterior wall of a building, it has been painted on a separate wooden surface and hung here.  It can be taken down and moved to another location.  This painting was done by Slava, Mindy, Pneil, and Juan, members of the London Multicultural Youth Association as part of the Youth Uniting People Murals Project of 1997.

The painting is called Bridging the Gap and it depicts the building of the historic Blackfriars Bridge here in London.  It was chosen as a symbol of unity and cooperation between cultures.  It shows a view of the bridge looking north from the east bank of the river at the foot of Ridout Street.  In the background of the painting, you can see some other iconic landmarks of the city including the Thames River and the old Carling brewery.   At the time the bridge was erected, west London was known as the village of Petersville. 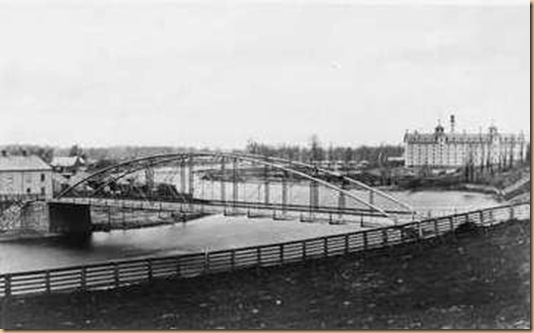 A photograph of Blackfriars Bridge from 1880.  The bridge was built in 1875 from a kit that had been mail-ordered from the Wrought Iron Bridge Company in Canton, Ohio.  It is one of the rarest types of truss bridges, a wrought iron bowstring (tied arch) bridge.  Most of these were built around the same time as this one but have not survived due to the limited weight they can support and the intricate nature of the structure.  Work has been done to update this bridge and keep it working as it is still used today for both pedestrians and vehicles.  At 216 feet long, it is the longest working span of this type in North America.  For more information check out: http://en.wikipedia.org/wiki/Blackfriars_Street_Bridge 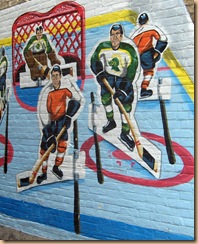 These paintings were done by Andrew Silk as the result of winning a competition to create hockey related murals in honour of London’s hosting of the Junior World Cup in 2007/2008.  He incorporated some interesting elements into this mural: the players wearing green uniforms are, of course, members of the London Knights hockey team and his scene resembles one of those old-fashioned hockey games.  (There are actually two murals on either side of this alley, looking like the two ends of the hockey game).  I’m actually torn by one aspect of this.  You can see that this is just a grungy old alley and there are trash bags right under the murals.  On the one hand, I think, oh what a shame to have his artwork sullied by the presence of the trash but on the other hand, I think that maybe his artwork adds some beauty to an otherwise ugly space.

Our downtown area, when I first moved to London as a child was a busy, thriving area full of life and activity.  There were many stores and other businesses there and it was a hub for the city.  I remember hopping the bus and heading downtown many many times to meet up with my friends, go shopping, grab some lunch, go to the movies, and so much more.  Then, the downtown core began to die off a bit.  Many stores were moved out to malls in the suburbs where parking was abundant and free, some buildings fell into disrepair, the homeless population increased (sadly), and many people simply stopped visiting or working in the downtown area. 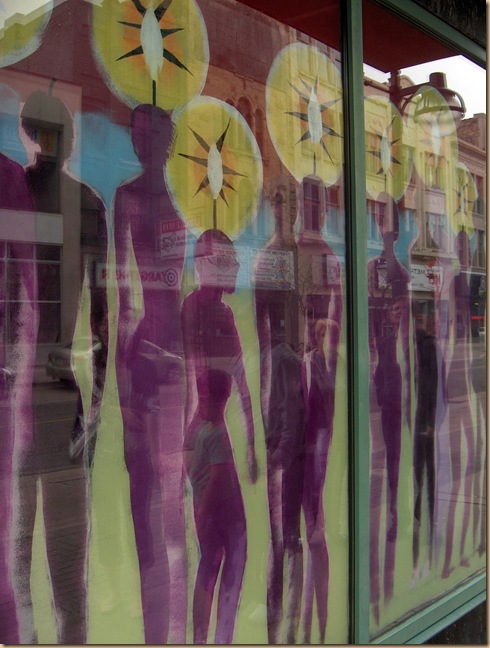 In recent years, as with the downtown areas of many other cities around North America, there has been somewhat of a rejuvenation of our downtown core.  The addition of these murals has been part of the plan for beautifying and breathing new life back into the area.  These murals are painted on the glass windows that used to be some storefronts at one of the main intersections (Dundas and Richmond Streets).  It is also the location of a very busy, major bus stop/transfer area and it was felt that there needed to be the addition of some artwork to give passengers something beautiful to look at and to draw them back to the downtown area.

Murals painted on the inside of glass windows by Steve Tracy.  The only reference I could find to Steve Tracy was here: http://www.londonarts.ca/Default.aspx?Select=ArtistsDetail&Business=tibgRe%2Bjvdbhes%2BVxlwxqg%3D%3D