You are here: Home / COOK / How to Make Soft Pretzels

I’ve been making these soft pretzels since university when my roommate taught me how.  This recipe was handed down through her family (she taught me a lot of fabulous German recipes too!!!) and we used to go to the cheese shop at the local mall to buy port wine cheese spread to put on them.  Delicious!

We love to eat them all year round, but they are definitely something we connect with the Lenten period as well. Read below if you’d like to learn more about the origin of these pretzels and how they serve as a reminder of God. Or simply scroll down if you’d like a printable version of this recipe!

HOW TO MAKE HOMEMADE SOFT PRETZELS

You can, of course, make these anytime but they are a Lenten favourite for my family. We serve them several times throughout the season!

Why pretzels for Lent?

In the early days of the Catholic Church, the laws for fasting and abstaining from certain foods were much stricter than now…hence the reason for Mardi Gras or “Fat Tuesday”.

In some cases, only meat was abstained from – in others, this included fish and all products that “come from meat” such as eggs, milk, and cheese. In other customs, anything considered “decadent” such as sweet foods, things with fats in them, and leavening agents were forbidden during this time.

According to legend, a monk in the 4th century was making some Lenten bread which consisted only of water, flour, and salt.

As he was forming these breads, he decided to form the breads into something that could serve as a reminder to his fellow monks that Lent was a time of prayer.

So he rolled the dough into strips and then crossed the dough over itself (in the pretzel twist form that we are used to) to simulate the look of a person’s arms folded in prayer (at that time, folding one’s arms over their chest was a very common prayer position). It is said that these breads were called bracellae which is Latin for little arms.

In Germany, this became bretzel, which later through time, became pretzel.

Another idea for how the word pretzel came about was that a young monk handed the breads out to children as a reward for being able to recite their prayers properly. The Latin word for little reward is pretiola and it is possible the pretzel evolved from this.

However the name came about, these breads became very popular during Lent and became known as symbols of good luck, long life, and prosperity. 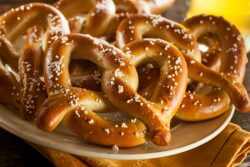 This homemade soft pretzel recipe is easier than you might think! I’ve been making it for over 30 years now and it never fails. Try it with beer-mustard sauce or some port wine cheese spread.

I just do a very simple pretzel twist but if you’d like to try the more traditional one, here’s a video of how they do it at a New York pretzel shop:

[youtube=http://www.youtube.com/watch?v=A832PrDGwqk]
What about those leftover pretzels that you weren’t able to eat fresh out of the oven? Well, first of all, be sure to keep them wrapped up to limit the amount of drying out they will do. Then, if you’d like to soften and warm them up again, try this trick:

Place the pretzel on a piece of foil large enough to wrap it in. Sprinkle on some water. I just get my hands wet under running water and then shake them over the pretzel. I know some people who use even more water – up to a tablespoon of it – but I find it can make the pretzel soggy. Experiment with what works for you and your preferences! Now, wrap up the pretzel and pop it in a 250 degree F oven. Heat it for about 15-20 minutes. Boom! (Nearly) fresh pretzel again.

How do you eat your soft pretzels? Just as is (my daughter’s preference), with port wine cheese spread (my favorite), or with a mustard or beer cheese sauce? If you have some other great ideas for it, be sure to share them in the comments below. I’d love to try them.
Previous Post: « Colcannon, a Tasty Irish Side Dish
Next Post: Steak and Guinness Pie Recipe »