You are here: Home / INSPIRE / There’s No Place like Home

I was born in Cincinnati, Ohio. I suppose in a sense, that’s my hometown. I lived there until I was 5 so I don’t have many memories of it. One of the memories that stands out the most, strangely enough, is not really of Cincinnati. it’s actually of leaving Cincinnati on Sunday afternoons and heading over the Ohio River to Dayton Kentucky where my grandparents lived. 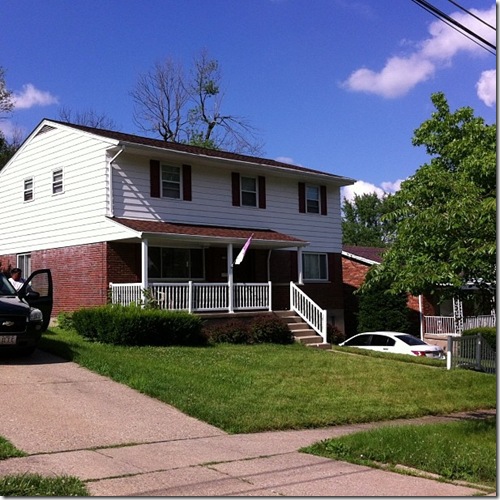 The house I lived in until age 5, Cincinnati, Ohio

I remember begging my dad to “take the singing bridge”! The way the bridge was constructed, when cars would drive across, it would make this humming sound and to a small child, that sure sounded like it was singing to me. I remember getting close to the stadium and crossing my fingers, hoping that when we passed it, I would be lucky enough to see the balloon man who stood on the corner every game day.

When we arrived at my grandmother’s house, I would go running in, letting the screen door (one of those awesome wooden ones) slam behind me (much to her chagrin!) yelling, “Hungy Grandma, hungy” (and yes it’s hungy not hungry – don’t really know why I didn’t pronounce the “r”), which was my way of letting her know that I was more than ready for some of her amazing cooking. The meal was usually Southern fried chicken with mashed potatoes and white creamy Southern gravy. I’m sure there was other food as well but Grandma made the best fried chicken, mashed potatoes and gravy in the world so that’s what always stood out for me.

After we ate, I’d grab my dad’s hand and drag him out the door. My grandma lived only a couple blocks from the Ohio River and I loved going down to the riverbank with Dad to watch the boats travel up and down.  If we spied one of those old fashioned riverboats, I felt like I had hit the jackpot. Actually going on one of those riverboats is still high on my bucket list.

My grandma’s house as it looks now, Dayton, Kentucky

When we’d get back to Grandma’s house, I’d run to the side porch and make a bee-line for her porch swing. Back and forth, BANG, back and forth, BANG – I’d just swing and swing and swing, each time banging the swing right into the outside wall of the house until one of the grownups would come out and tell me to stop. I tried – really! I tried so hard to swing gently and not slam into the house anymore but it didn’t take long before it started once again.

Soon, my dad would join me out on the porch. I can still remember the sweet scented tobacco blend burning as he lit up his pipe. Looking back on it now,  I’m pretty sure he just came out there to make sure I would stop making my mom and grandma crazy with all the banging noises, but I treasured that alone time with him. He would tell me stories about growing up in Dayton, teach me all about the river and river life, and we’d usually end our time together by making plans to go fishing.

Once we moved away from Cincinnati (heading to Montreal when I was 5), we would return to Dayton to visit my grandma. Although I knew that I had been born and had lived in Cincinnati, it was Dayton that always made me feel at home. There was always something comforting about going back to Grandma’s house, sitting on the porch swing, sipping a sweet tea (or Mountain Dew – and then my dad would do his funny rendition of the Mountain Dew song in this weird accent that I think was his idea of what a hillbilly would sound like) and watching the sunset over the river. To this day, there is a sense of tranquility, of belonging, of home whenever I get the chance to be in Dayton, Kentucky.

What is your definition of a hometown? Is it where you were born? Where you grew up? Or maybe the place you most connected with?

I’m taking part in the Canucks Content Carnival blog hop– monthly writing prompts.  This month is: My Hometown.  Check out the posts by my blogger friends on this same topic below. 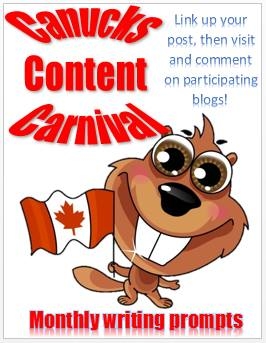