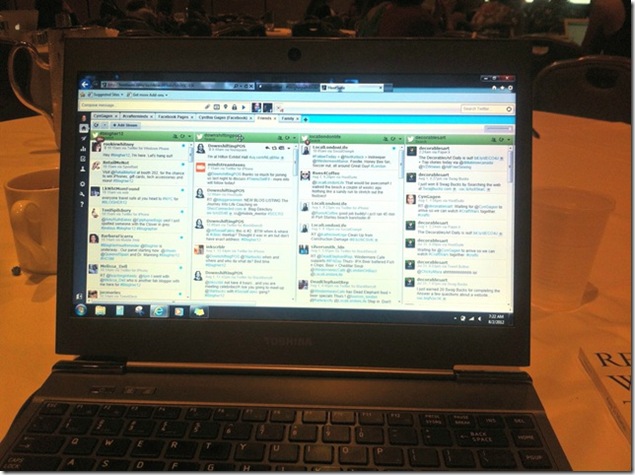 When I found myself with yet more hinge issues on my laptop, I knew I had a big problem.  You see, I was scheduled to attend CHA (The Craft and Hobby Association Summer Trade Show) with Charity Wings as their social media coordinator for the event, followed by BlogHer ’12 blogging conference at which time I would be live blogging and twit-facing (as Elena calls it) about the event.  There is no way that my laptop was going to hold up to an 8 hour road trip to Chicago, a 13 hour train trip (each way) from Toronto to New York City, and being opened and closed multiple times as it was taken in and out of my laptop bag while attending and reporting on these events.  Microsoft to the rescue! When Kristina Libby of Microsoft heard about this problem she graciously agreed to lend me a laptop that would allow me to properly attend to all the social media needs at these events.  I firmly believe that my ability to continually update of the Charity Wings blog and Facebook page helped us in reaching and exceeding our goal of over $5000 for A Place to Bark animal rescue and I couldn’t have done it without this Toshiba Portege Z835-P330 ultrabook.

The first thing that struck me when I pulled the Toshiba Portege Z835-P330 ultrabook out of the box was how incredibly light it is.  It’s only 2.4 lbs as compared to the 6.6 lbs of my current laptop.  4.2 lbs may seem like a small difference but I can assure you, if you’re constantly pulling the computer out of your laptop bag and then having to stash it away again quickly, you really feel the extra weight.  Comparing the Toshiba with my current laptop – it was the difference between being able to balance the Toshiba on one arm while typing with the other hand compared to always having to hold my laptop in both hands and still getting concerned sometimes that I might drop it because of the weight.  It also meant that with the Toshiba, I could add a couple other necessities to my laptop bag without fear of it getting so heavy that I’d be unable to keep up with carrying it through a long day at the conference. 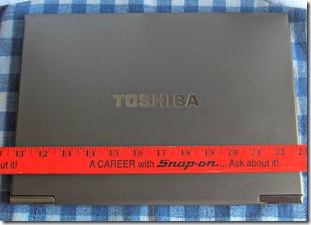 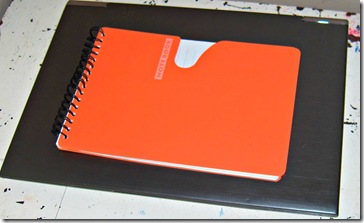 These pictures give you an idea of the size of this laptop: the orange notebook on the right is about 5 by 8 inches.

Another important consideration for me with a laptop is the battery life.  I’m always using mine on the go and you can’t always find an outlet to plug into everywhere you might take it.  In particular, while at CHA, I knew there would be times that I would be on the tradeshow floor and not only would there be little chance of finding an open outlet but running cords could pose a tripping hazard.  At BlogHer, those outlets were at a premium!  While I brought along a power bar to be able to share the outlet with as many other attendees as possible, there were still some places where even that was impossible and the long battery life of the Toshiba Portege Z835-P330 ultrabook was incredibly helpful in those instances.  I found that I got at least 7 1/2 hours of battery life from it as compared to the perhaps 3 hours of my current laptop. 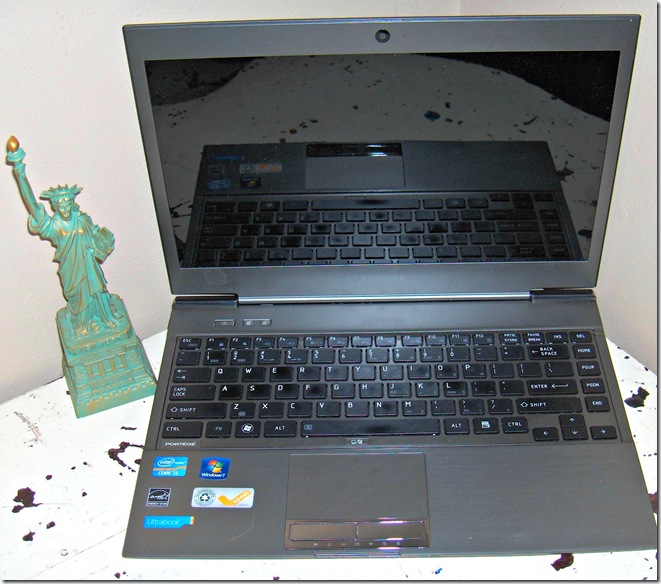 So far, the Toshiba Portege Z835-P330 had met 2 of my top 3 most important needs in a laptop.  The third is performance.  According to a techie person I know, I’m a good test of a computer’s capabilities.  I want them to be able to work hard for me.  I’m a multi-tasker and usually have multiple tabs open at a time and am working on many different platforms simultaneously.  I have known other laptops to find it difficult to keep up with me.  They would overheat or crash or chug away taking what felt like forever to perform the tasks I required of them.  Not so with this Toshiba.  I could blog, edit photos, tweet, Facebook, do web searches, map locations, and more all at the same time with no lagging performance.  The computer kept up with me and my crazy multi-tasking and was a dream to work on! 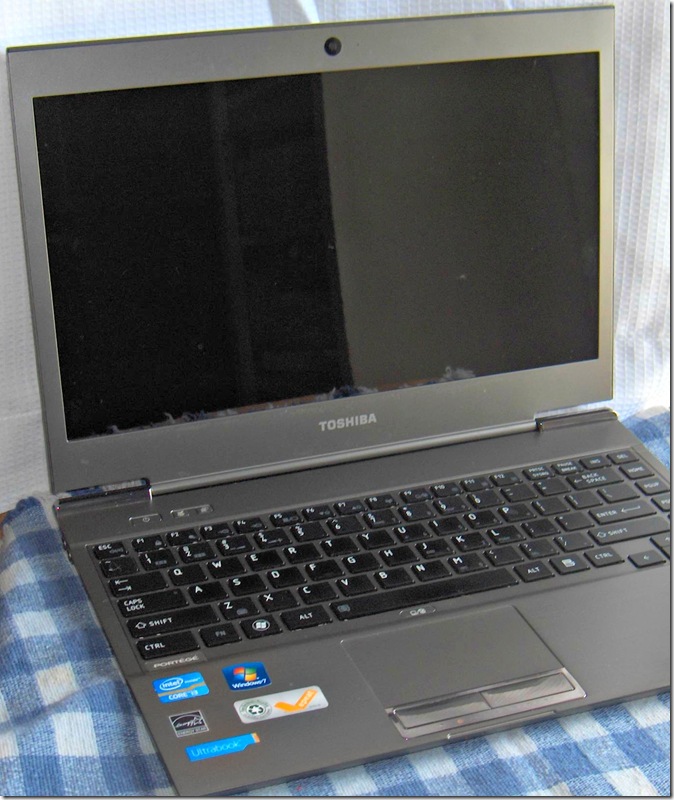 A couple final qualities which I found particularly useful were the backlit keyboard and the backlit screen.  Again, because of doing social media throughout many hours of the day and night  and in so many different locations (most of which weren’t designed for working on computers), this was so helpful to me whether it be in a poorly lit booth on a tradeshow floor, attempting to get some late night work done without waking my hotel roommate, or updating blogs and social media platforms while on a dark Amtrak train.

Now if you’re looking for a more “techie” kind of review on this machine, well, you’ll need to look elsewhere.  I can’t tell you anything about the screen resolution, the type of processor, how many GBs of RAM it has or any of that…..well I suppose I could look up the specs and rattle them off to you but it wouldn’t mean a lot to me and wouldn’t have any influence on my review.  What I can tell you is that this Toshiba Portege Z835-P330 allowed me to get the work done that I needed to do wherever and whenever it needed to be done.  That’s what I’m looking for in a computer and I couldn’t ask for anything more from this machine.  Thanks again to Microsoft for allowing me the use of this laptop!

Please check out these sites:

And be sure to join in on the Windows Tech Tuesday Live Twitter chats every Tuesday from 3-4 pm Eastern.  Follow the hashtag #winchat and follow these Twitter accounts so you don’t miss a thing:  @windows, @kristinalibby, @brandonleblanc @daniellaycock and @windowsblog  These chats are incredibly educational and informational and there are great prizes given away!  Check out the Windows Blog or tweet any of the names above for more details!