You are here: Home / INSPIRE / Pets / How to Take Care of a Dog with a Cold

Poor girl! First the dog’s eye got all goopy, then that goop turned yellow and her eye got bright red – yep, she had pinkeye. Just as we started to get that under control and it’s nearly cleared up…..BOOM! She has a runny nose and is sneezing her poor head off. 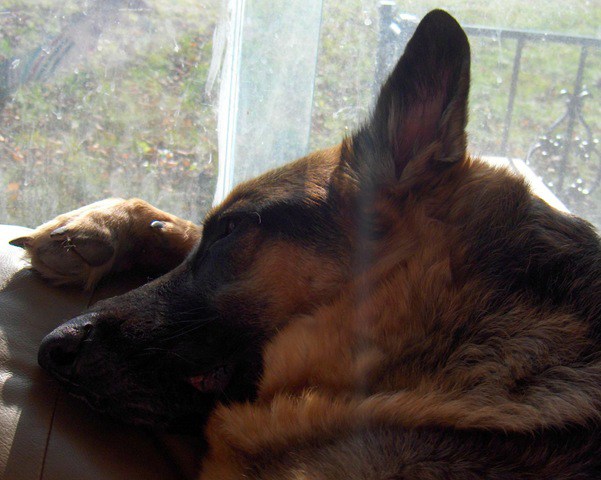 She doesn’t really have a cough – not that I’ve ever heard a dog cough before. Instead, I thought she had an upset stomach and was going to be sick from the noises she kept making. The vet says she has some post-nasal drip that is making her feel like she’s choking or going to throw up. Ugh, I feel so bad for her.

She’s never had pinkeye or a cold before and the looks she keeps giving me are heartbreaking. She’s clearly not feeling her best (but is still a sweetheart through and through) and she seems baffled by it all. 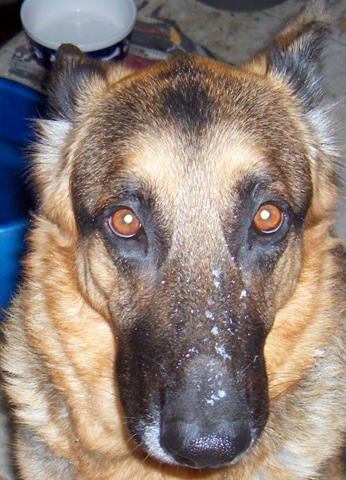 So, what to do now? How do you take care of a dog with a cold?

1) I’m trying to limit her time outside. Our weather has been crazy lately – lots of rain, chilly temperatures, and even icy rain, followed by sunny warmer days. The dog has developed this habit in the past few months of wanting to go outside, lie down, and just hang out for half an hour or so no matter what the weather but for the past few days, I’ve been taking her out on a leash and then bringing her back in as soon as she’s finished doing her business. Usually when she comes inside, I just give her a cursory wiping off with a towel but right now, I’m trying to get her as dried off as possible  Then I’m insisting that she crawl into my bed and I bundle her up in warm blankets, snuggling her until she’s nice and warm again.

2) The dog sleeps in my room – either in her chair or in my bed. I’ve added some warm blankets to the chair (it’s leather and I want to be sure she’s warm and cozy during the cool night temperatures) and each night, as per the advice of the vet, I turn on a cool air humidifier to help moisten the air and loosen up her congestion.

3) She just loves getting her face washed with a nice warm washcloth anyway so I’m doing this several times a day (instead of just once like I usually do) to keep her face clear of any of the gunk coming out of her nose and eyes. I know she finds it soothing and I think when all that nastiness gets dried and crusty on her face, it gets rather itchy for her.

4) I made her some homemade chicken with rice soup. Yeah, you read that correctly. Call me a crazy dog lady but the vet says that just as chicken soup may have a healing effect on a human’s cold, it could also do the same for a dog. Besides, she loves chicken and rice AND it’s good for her stomach. With all of the choking-like symptoms she’s having, it wouldn’t take much for her actually to get sick and this may be an effective preventative measure too. Plus, the broth encourages her to take in extra fluids.

5) Just like with humans, steam can be helpful in opening up the nasal passages. It’s important to place the humidifier in a safe spot where the dog can’t touch it or knock it over. I just use plain water. If you want to add something to it, I would suggest talking to your vet first.

5) I’m monitoring her closely. Even though her symptoms are quite mild – mild enough that she can still chase after the cats and bark at the people walking down the street – many other illnesses can have cold-like symptoms. And since she’s an older dog, her immune system might not be as strong as that of a younger dog. So, I just want to keep an eye out for anything that might require veterinary intervention. Apparently, some dogs can develop an infection and may need oral antibiotics.