You are here: Home / COOK / Sweet with a Touch of Heat: KFC Canada’s New #SweetChiliCrunch 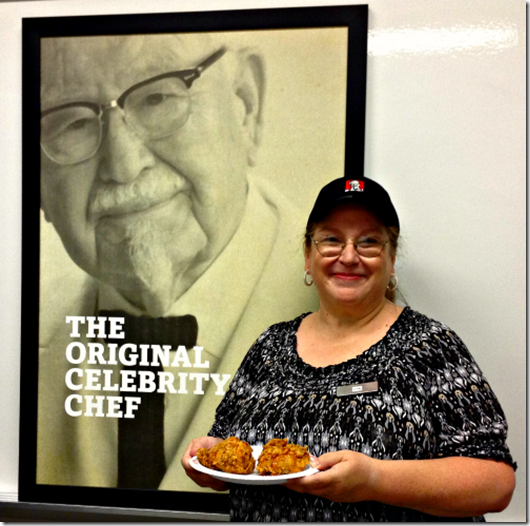 Me and Col. Sanders – we go way back.  And I’m not just talking about a connection through his yummy chicken. I actually met the man in person!!! We were driving past a local KFC near my grandma’s house in Kentucky when I was a little girl. I saw the sign saying that he was there in person that day for the grand opening and I begged my parents to pull over so I could meet him. That’s right, the original celebrity chef himself shook hands with me and gave me an autographed bank (a statue of himself). He was the sweetest man. We happened to be leaving the KFC at the same time he was and for a while, the car he was being driven in was right in front of us. Sitting in the backseat, he turned around, facing our car and waved at me the whole time until his car had to make a turn and disappeared from view. 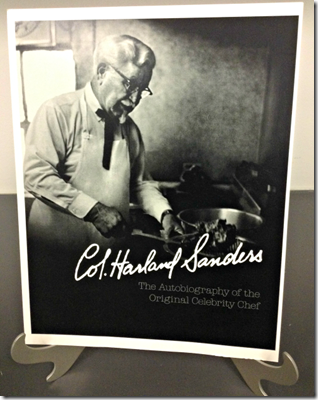 I’ll never forget that day. It was a big thrill for a little girl, especially since KFC has been an important part of our family for as long as I can remember. As soon as I would see that bucket of chicken arrive at our house, I knew we were going to celebrating some momentous occasion. Sure it might have been something like a birthday or holiday but many times, it was just because…just because we wanted a night where we could concentrate on being a family instead of on cooking and cleaning up, and still have yummy tasting food. As I grew up and had a family of my own, this tradition continued and I have many fond memories of movie nights, board game nights, and more, all with that famous bucket of chicken a part of it. 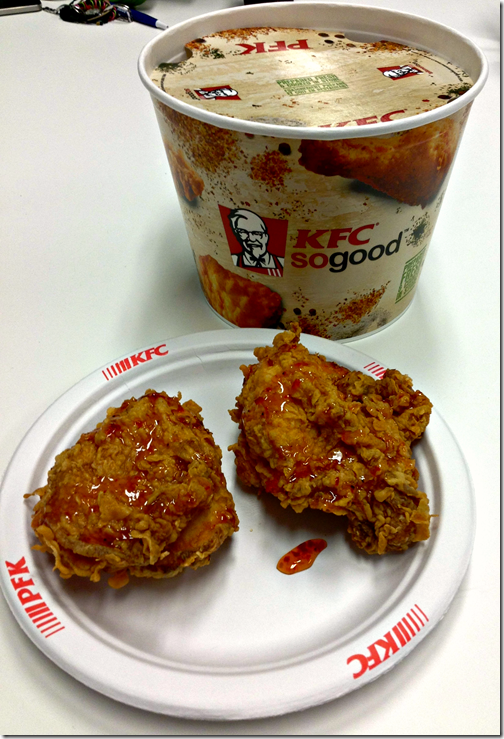 Now, our family favourite KFC is introducing a new flavour and I have the inside scoop on what makes it so special. Do you ever watch those competition cooking shows on TV? Often, the challenge will be to take a classic dish and ramp it up a bit. For those chefs, that usually means deconstructing it or adding in more modern flavour profiles or using newer cooking techniques. For KFC Canada, it means Sweet Chili Crunch chicken. It’s that famous Colonel Sanders chicken but it’s a little bit sweet and has just a touch of heat to it. It’s “KFC like you’ve never had it before”. You may have seen that phrase being used to describe this chicken and I’m here to tell you, it’s so true!

Along with several other bloggers, I recently was invited to the KFC test kitchen for an exclusive, behind-the-scenes visit to learn just how the new Sweet Chili Crunch Chicken is made. I expected a tour of the facilities, some power-point presentations on just what makes KFC chicken so great, and maybe a cooking demonstration of the new chicken – after all, we were promised a taste of it!.What I didn’t expect was the amount of love and care that goes into that chicken and I’m glad I got to see it firsthand. 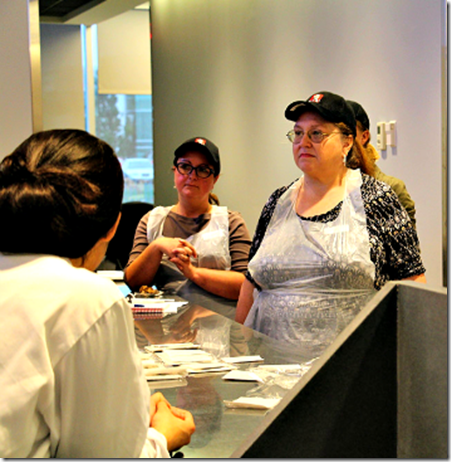 I suppose I’ve never put much thought into how my KFC chicken was being prepared. I mean, I viewed it as your typical fast food and that means it probably comes into the restaurant already breaded, frozen and they just toss it in the fryer when you place your order, right? Wrong! I guess I assumed that they had moved away from Col. Sanders’ original methods in favour of something faster and cheaper as often happens these days. Then, we met the team from KFC and they started teaching us about “the hard way”. The hard way is something that Col. Sanders stood behind and it’s something the KFC brand still adheres to.

“The easy way is efficacious and speedy, the hard way arduous and long. But, as the clock ticks, the easy way becomes harder and the hard way becomes easier. And as the calendar records the years, it becomes increasingly evident that the easy way rests hazardously upon shifting sands, whereas the hard way builds solidly a foundation of confidence that cannot be swept away.” – Colonel Sanders 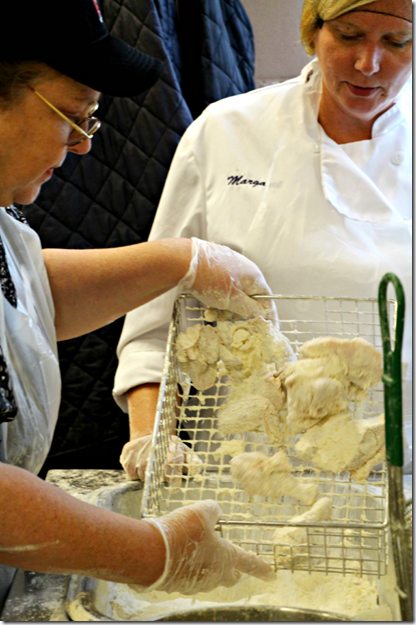 What better way to learn about “the hard way” of preparing the new Sweet Chili Crunch chicken than to get my hands dirty and make some myself? First step in preparing this new flavour is marinating the chicken pieces (locally sourced across Canada) for 12 hours to ensure amazing flavour in every single bite. Next up, the double breading process – that’s me in the photo above working on that step! 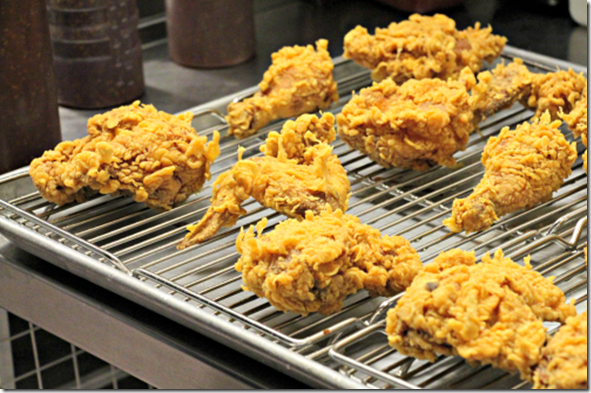 Let me tell you, when they call it the hard way, they have good reason at KFC. Their food isn’t just thrown together – there is care and hard work put into each and every step. I have a new appreciation for the KFC cooks! Off the chicken goes into the state of the art fryers and a short time later, it’s crunchy and delicious. 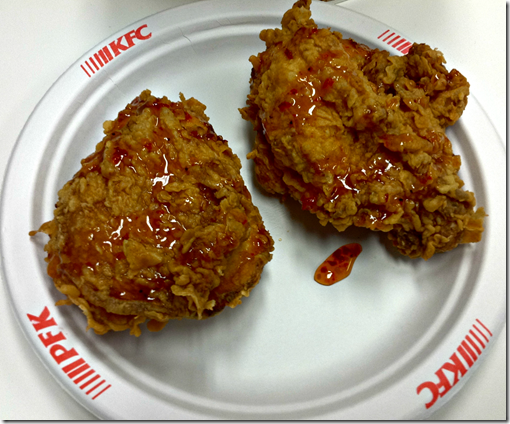 One final step is to add a drizzle of their special Sweet Chili glaze to add one more layer of flavour. Now it’s time to take a taste. Mmmmm. There are some citrus notes with the right balance of sweet and heat. AND it has an amazing crunch (I’m a huge fan of the crunch!). After one bite, I just wanted more!

Now you might be thinking, wait just a second Cyn! Sure you liked the chicken you tried but come on – you were at the test kitchen. Of course it’s going to be good there! How can I be sure that it’s going to taste just as good at my local KFC? Good question – I’m glad you asked.  You see, KFC has an amazing training program in place. They have employees who travel across the country ensuring that their cooks are fully qualified in each and every step of preparing their products and maintaining quality control. As you can see from the picture above of me with their Chief Food Genie (ok her real title is something like Head of R & D but this one really suits her), I’ve even received my certificate in Sweet Chili Crunch! 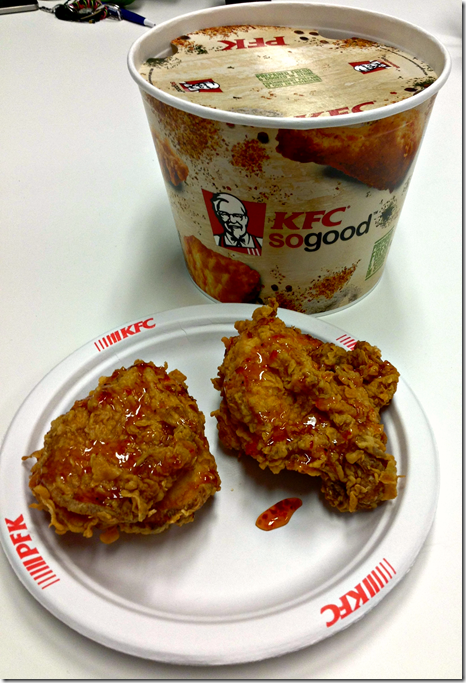 To say that I’ve had a little craving for more of this chicken since I tried it last week would be an understatement. I’m counting down the hours until they begin serving it tomorrow. And you can bet, I’m going to be having it as often as I can because just like Christmas, KFC Sweet Chili Crunch Chicken doesn’t last forever. It’s a limited time offer ending on November 23rd! Hurry on over to your local KFC Canada and try it while you can! Not sure the kids will like it? I think it’s got a subtle heat that even they will love but just in case, you can always mix and match it with Original Recipe (you didn’t think that was going away did you?) in any bucket for free!

Well, what are you waiting for? Go try the new KFC Sweet Chili Crunch chicken now! It’s so delicious – the Colonel would be proud.

Disclosure: I am part of the KFC #SweetChiliCrunch Kitchen experience program with Mom Central Canada and YUM Brands and I receive special perks as part of my affiliation with this group. The opinions on this blog are my own.