With Father’s Day coming up, I thought I’d share a few of my favorite crafts for kids to make, suitable as gifts to dads and other men. We made these MANY times in my classroom and Girl Guide troops!

There were a couple different kinds of cards that I made with my students.  One was this one – a gate fold card with the top corners folded down to form what looks like the lapels of a jacket.  I have a small rubber stamp that creates a necktie design but with the little ones, I would make much larger cards and then cut out a “lifesize” necktie out of cardboard.  They would decorate them and then we attached them to the cards with a piece of ribbon or elastic as they wanted their dads to be able to detach the ties and wear them.  It was heartwarming to see some of the dads in church that Father’s Day sporting their cardboard ties, complete with glitter, sequins, and other such embellishments!  The older kids really came up with some great ideas to enhance their cards.  They would add buttons and a pocket to the jacket.  One of them folded a little square of paper into what looked like a handkerchief flourish and stuck that into the pocket.  On this square she had written a little greeting to her dad and then inside the card, she wrote him a poem. 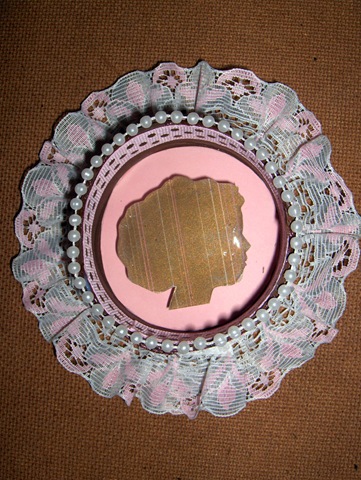 Another card popular with the little ones was a more personalized one.  We would do silhouettes of each child’s head in profile (shining a light on them so that it cast a shadow on the wall behind them – tape a piece of paper there and trace their silhouettes onto the paper) and put these on the front of the card.  A photograph is another option.  Then inside the card, we’d take their footprints (or if they weren’t keen on paint touching their feet we’d just trace around their feet).  The outside of the card would read “I love you from the top of my head” and the inside “To the tips of my toes”.  Such a sweet keepsake!  We used the same idea once on tshirts with the silhouettes on the front of the shirt and the footprints on the back.

This little desk organizer was a fun craft for kids to make for their dads.  It can easily be adapted to something for a woman as well and can be personalized with “clothing” that reflects the person’s occupation and with facial features, hair, etc that resemble the person.  The body of the person is a toilet paper tube and it serves as a pen/pencil holder.  The part behind the person is a box (Kraft Mac and Cheese dinner boxes, large Jello boxes, and similar items work well for this) to hold slips of scrap paper to use for jotting notes and phone messages.  The hands have slits in them to form fingers so that little notes can be placed there as reminders.

The first one was made by my daughter for my dad as a Father’s Day gift about 15 years ago – scrap fabric was used to cover the box and cardstock for the head and limbs.  The second one I made as a sample and used some leftover pieces of craft foam and felt for it.

Another fun one we made for golf loving dads (or any other golfers!) were these dogs.  They make cute little desk decorations and paperweights. I have found that the golf and country clubs in the area would sell and donate large bags of old golf balls (either regular ones or the plastic practice ones) and tees that we could use in making these.  Glue them together as shown and then add features such as wiggly eyes, felt ears, nose, and a tongue.  My dad adored the one my daughter made for him!