You are here: Home / COOK / Stuffing or Dressing?

I don’t know where I’ve been but I just discovered the new show The Chew on ABC.  It’s, of course, a play on the name of the talk show The View only this one is all about cooking.  If you can’t tell from this blog, I love to cook! I also love to watch cooking shows on tv (except for Chef at Home – that dude’s voice bugs me…he sounds like Bullwinkle!).  Anyway, I was pretty excited to find that Carla Hall (one of my all-time favourite contestants on Top Chef) and Iron Chef Michael Symon are both on the show! 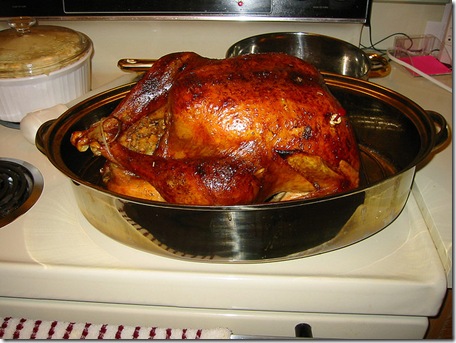 The other day I was watching it and the question was asked – that stuff that’s generally served at Thanksgiving along with the turkey – do you call it stuffing or dressing?  There was much animated discussion about it and they seemed to feel that it was a regional thing.  I guess that’s probably true.   My family is from the Ohio, Kentucky, Tennessee, Indiana area – some of which are border areas between the northern and southern parts of the US so we always have had a mix of traditions from both areas.  I remember my grandmother always called it dressing (I got confused the first few times she said it, thinking she meant salad dressing!). 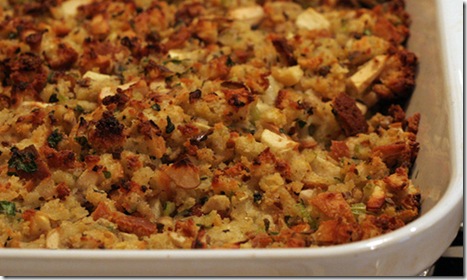 In Canada, where I’ve basically grown up, I was used to only hearing the term stuffing from around here but my mom used both terms.  She held the same position as Michael Symon asserted on The Chew (much to the protests of the other hosts) that if it’s cooked inside of a bird, it’s stuffing and if it’s cooked in a separate dish it’s dressing.  The ones who opposed him said that they were both exactly the same thing and that there was no difference between dressing and stuffing but I beg to differ.  There is a much different taste between the two as stuffing, cooked inside a bird or other meat, absorbs juices from the meat and the taste of the meat is integrated into the stuffing.  Also, I find that in general, stuffing is much moister than dressing – again because of the juices from the meat.

So, what do you think?  Stuffing or dressing?