You are here: Home / Entertainment / Orange is the New Black Fans are Repeat Offenders 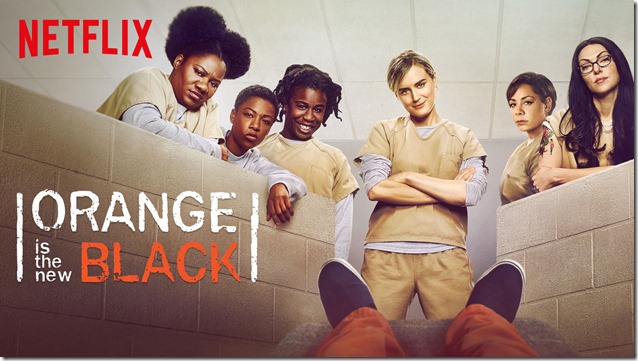 Are you an Orange is the New Black fan? The newest season launched June 17th (anyone else binge watch it in one weekend?) and now Netflix has done a little research, finding out that OITNB is one of its most re-watched series globally among viewers. I know that just before each new season releases, I go back to Season One Episode One and start it all over again.

Looking at the viewing habits of subscribers in over 190 countries, Netflix found more than half (53%) of Orange viewers have re-watched at least one full season of the acclaimed series since its debut in 2013. Not surprisingly, this re-watching behavior peaks each June in anticipation of the new season, this year being no exception. The most re-watched episodes? Many watch the last three episodes of a season prior to the new one beginning but the one that remains the most popular? Season 1, Episode 1 when Piper leaves her supportive fiancé Larry for her new home: a woman’s prison. 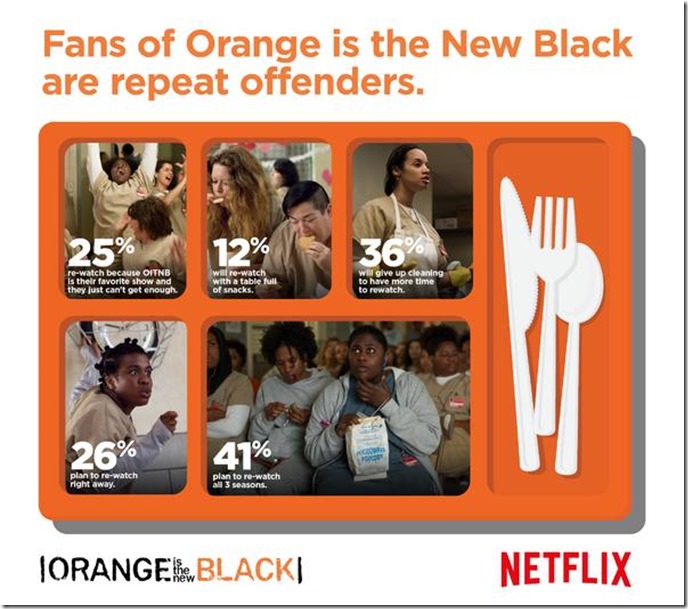 Of viewers polled, nearly a quarter (21%) plan to re-watch the previous season while 41% plan to re-watch the entire series – all 36 episodes. They’re eager to serve their time too with 54% planning to re-watch this weekend or sooner, and fans are even willing to give-up making their bed (30%), cleaning the house (36%) and cooking (10%) in order to have more time to watch .

Overall, most plan to re-watch without incriminating others – 36% prefer to re-watch solo, 8% with their pets and 12% with a table full of snacks (be careful with the pie). Those who prefer to have partners in crime will re-watch with their significant other (25%) or friends (14%). The majority of re-watching lockdowns will take place in the living room (43%) followed by the bedroom (41%) – no one chose the SHU.

The art of re-watching takes both a practical and emotional form. Top reasons for re-watching include looking for possible foreshadowing in previous storylines (25%) and reliving moments with favorite characters (29%). However, for others (25%) it’s as simple as Orange is the New Black being their favorite show and they just can’t get enough.

Most popular Orange is the New Black episodes:

If you haven’t had the chance to see it yet, Season Four will not disappoint you. It is full of twists and turns and jaw-dropping moments.

What has been your all-time favourite episode in Orange is the New Black?

I am a proud member of the Netflix #StreamTeam. I am so happy to partner with them to bring you information about your favourite (and mine!) Netflix shows. I receive compensation from Netflix for posting.

Previous Post: « BC Stack: A Digital Business Library of 65 Products on Sale Now Until July 1 2016 Only
Next Post: Thomas the Tank Engine is Rolling into St. Thomas Ontario July 2016 {Giveaway} »