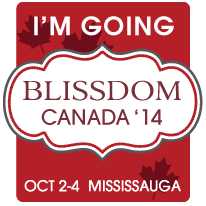 “Can you believe that? She just walked right past me and didn’t even stop to chat.” “Have you noticed that he’s been sitting alone through this whole conference? Anti-social much?” “What a b*tch!” “How rude!” “She’s so stuck up!”

Have you ever heard anyone talking about others at a conference like this? As I head off to get my bliss on at Blissdom Canada today, I started remembering hearing some similar statements at conferences in the past. And now, I’m challenging all of my fellow Blissful Ones (or for that matter, anyone interacting with other people today) to step back from the judgement and consider that there may be more there than meets the eye.

Most people don’t believe it, but I’m actually quite a shy person. It’s really really difficult for me to initiate a conversation with someone that I don’t know really well. I try hard to overcome it but just know, that if you see me nearby and I’m not really talking to anyone, it’s probably because I’m trying to come up with a way to get a conversation started with someone and the guts to do it.

I’m terrible with names and faces. Sometimes when I don’t immediately go running up to someone to talk to them, it’s because I’m still trying to place them in my head. Have we met before? Do I think we’ve met before because we’ve talked and I’ve seen their pic so much online but in reality, we’ve never met in person? What can I say to them that won’t make me sound stupid and embarrass myself – I typically say “Good to see you!” instead of “Nice to meet you!” just in case.

If you see me off by myself, sitting alone and kind of away from the main action, it might because I’m feeling overwhelmed. I am, by nature, mainly a loner. I live alone, work from home – so my social interactions (in person) are few and far between. I’m used to quite a bit of quiet and solitude. It’s not that I don’t enjoy the fun of Blissdom but every so often, having so many people around me, having constant noise around me can overwhelm me. It’s not you; it’s me.

Sometimes you might see me at a conference and think that I look unhappy – cranky even. Actually, I’m probably one of the most consistently happy people you’ll ever meet. However, I have permanent pain and injuries from a car accident and I have some chronic health conditions that mess with my immune system. That face is not annoyance or bitchiness. It’s pain. At that moment, I’m just working very hard internally to deal with the pain I’m in and sometimes I can’t keep my face from showing it. To top that off, right now my immune system has gone really wonky and I have massive sores inside my mouth and throat. If you look at me carefully, you can probably see that my mouth doesn’t look quite right. So, along with the pain, I’m feeling incredibly self-conscious and well, that’s just going to make my shyness even worse.

I’m sure there are many others at Blissdom, at other conferences, even just in your day to day life who might seem distant or even downright rude but just stop yourself for a minute and think, could it be that there’s something in their story that I simply don’t know? And then, if you’re one of those lucky extroverts, go on over and strike up a conversation. You might be pleasantly surprised by the results.