You are here: Home / LEARN / BlissdomCanada2013 / I Woke Up In Tears This Morning: A Different Kind of Blissdom Canada Followup Post

I started this blog post the morning after this picture was taken.  I had to put it aside for a while and come back to it – so many raw emotions, so much to process.

I woke up in tears this morning.  Ugh – not the way I want to start a blog post but there it is.  Fifteen years ago I was in a car accident that changed my life.  Oh, many of you would look at me and think, what’s she talking about?  There’s nothing wrong with her.  Even those of you who hang out with me on a regular basis might think the same thing.  I mean, look at the woman in the picture up there.  She’s dancing in a conga line, obviously smiling, laughing, having fun, right?  And yet, I woke up in tears this morning.  Tears caused by excruciating pain and being unable to walk for several hours after awakening.

For the past 15 years I have lived in chronic pain and it’s getting worse.  Much worse.  They told me it would.  The doctors.  They said that over the years everything would deteriorate and that any function I had restored through long hard hours of physiotherapy would start to decline.  That the pain would increase.  That those occasional days using a cane would become more and more frequent until the cane became a constant companion, eventually turning into a walker and ultimately into a wheelchair.

The reason most people don’t know about this is that me talking about it – well that’s pretty rare.  It’s partly that I just don’t want to annoy other people with complaints nor do I want them to think “less” of me – like I’m not capable of keeping up.  Or….shudder….I worry that people will feel sorry for me.  Even more than that though, I don’t want to limit myself in my own head.  Right after the accident, I was on heavy medication and in that fog, it was easy to just succumb.  Part of me told myself that I needed to embrace acceptance.  And perhaps right at that time, that is just what I needed.

But then, one day, that life just wasn’t enough.  Don’t get me wrong – I was still beyond grateful for the gifts I had been given.  Certainly, I lost some things on that day in September of 1998, but there were three that I didn’t lose that mean more than any of those – the lives of my daughter, my mother, and myself.  Every expert who saw our car after the accident told us the same thing, “We can’t believe anyone survived that accident.  You are all so lucky.”  My daughter, being in the back seat (we were rear-ended), was the luckiest of all.  And perhaps that was another big factor that drove my mindset following the accident – what right did I have to complain, to rail against the situation I was in when my daughter’s life had been spared?  What right did I have to want more?

I went to pain specialists who focused on acceptance, tolerance, and learning to pace myself.  I’m not saying that this is a bad plan to follow but In recent years, a nagging voice inside of me kept saying that it needed a bit of a revision.  I still accept my pain as a fact.  I understand that it won’t go away, I understand that I have some limitations, and I still refuse to let it suck the happiness out of my life.  I am still grateful beyond belief and I have retained an important lesson from the car accident – to really really focus on what’s important in life and make it a priority.

So what has changed?  I suppose that when looking at what’s truly important in life, I’ve finally come to realize that I am important.  Years ago, I wouldn’t have dreamed of dancing in a conga line.  I wouldn’t have dreamed of dancing at all.  Dancing causes intense, burning, shooting pains from my left hip down.  Heck, walking, even just standing can cause that but dancing certainly makes it worse.  Dancing means that I will spend at least a week if not longer pretty much on bedrest.  It means days, possibly even weeks of excruciating pain way beyond my “normal” levels – and believe me, after living with chronic pain for over 15 years, my tolerance is really high.  Since I’ve been home from Blissdom Canada, I’ve experienced all of that and more: intense migraines from referred pain, a flare-up of my Crohns disease (that comes from the stress I put my body through), and sheer exhaustion. 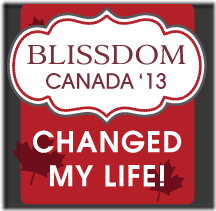 You’re probably thinking that I should have known better.  That I should have paced myself.  That I knew I was exceeding my limits and did it anyway so……..  Well, here’s what you need to know.  I don’t regret a thing.  I learned many lessons at Blissdom Canada this year, but the greatest was that my spirit needs to dance.  There’s so many wonderful things right at my fingertips and I’ve been holding myself back from them.  And there, at Blissdom,  were the most amazing people saying:

BE BRAVE!  BALANCE IS GOOD BUT DON’T BE AFRAID TO BE AFRAID! THERE IS STRENGTH IN VULNERABILITY AND IT’S OK TO SHOW IT! EVERY TIME YOU USE THE WORD “JUST”, YOU GIVE PEOPLE PERMISSION TO EXPECT LESS FROM YOU.  OWN YOUR AWESOME.  ABOVE ALL, REACH OUT FOR WHAT YOU WANT AND BE HAPPY!  And my own bit of Blissdom Canada ‘13 wisdom: When your spirit says dance, dance!