You are here: Home / LEARN / Goal Setting / How to Stop Overthinking Everything

I belong to several mastermind type blogger groups on Facebook. We discuss all kinds of blogging and business issues, and quite often, the topic of overthinking comes up. Why? I suppose it’s because it can be one of the most common roadblocks to success. How many times have you had an idea for a new business, a new direction for your business and let it sit there on the back burner for ages while you thought about it some more? I’m so “good at it” that I have even been known to overthink what kind of decor I want in my home. It’s not that I’m a worrier. I just have perfectionist tendencies. Either way, overthinking holds me back. After years of doing this, I’ve made some progress and have some tips to share on how to stop overthinking everything. 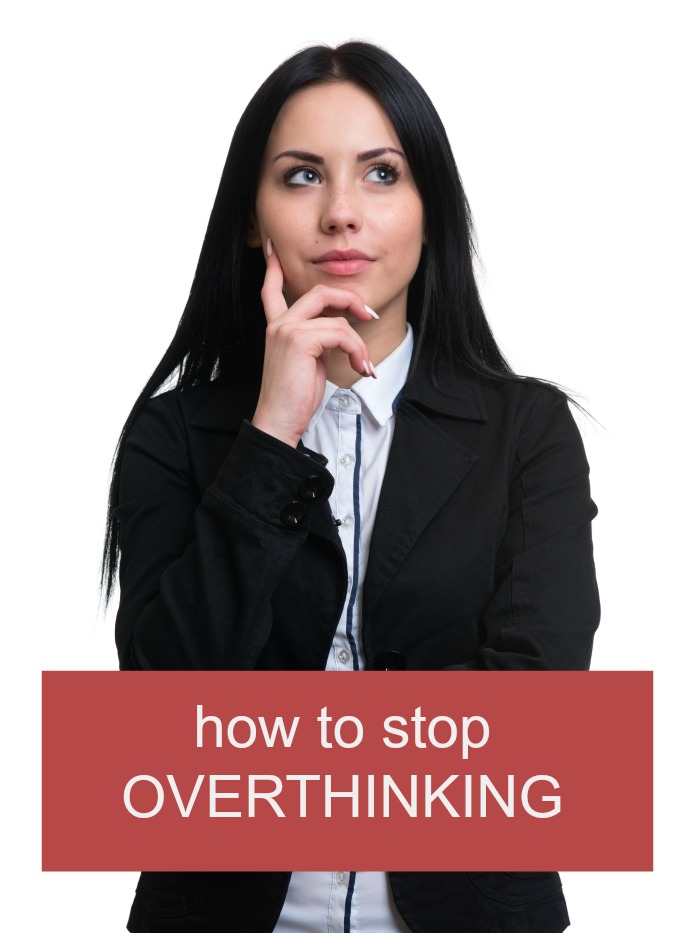 HOW TO STOP OVERTHINKING

1. Build breaks into your day.

If you’re like me this alone isn’t going to stop the overthinking but it’s a useful component. You see, I’ll put way too much thought into almost anything. I love to create art but I have been known to put way too much deliberation into every little action I take. Meditation and visualization are also difficult for me for the same reasons. If a thought or image pops into my head, I want to break it down into its tiniest components and overanalyze each one.

Putting too much thought into everything can mean that your brain is filled with a thousand different thoughts at once. It is overwhelming. So I just start writing. No editing. No stopping to think about what you’re writing. Write down whatever is on your mind and then you can sort through it later.

Using a timer is such a great way to get past overthinking. When I was in school, I always did my best work right before the deadline. For me, there are two reasons for this. First of all, I do like some time to mull things over. Tossing an idea around in my head for a while lets me consider my options. It gives me time to see if God (maybe you think of it as the universe) puts something in my path that is just right for this project. And it helps me feel less like I’m rushing into a rash decision. But eventually, I have to just set myself a deadline. “Okay Cyn, you have had a week to mull this over, now you’ve got an hour to get a plan on paper.”

4. Avoid asking for advice over and over again.

I see this in groups all the time. They ask a question in one group, then another, then another. Three days later, they might even ask again. It can be really valuable to do some crowd-sourcing. Sometimes that advice can point out things that you are just too close to the subject to see. Other times it can allow you to look down a path you hadn’t previously considered. But asking for it over and over again is often a sign that you just aren’t getting the answer you want. If you already have the answer that makes you happy, stop asking for others to validate it. Sure, get the input but if all that does is make you even more convinced about your own ideas, then stop. AND, for heaven’s sake, if you’re going to ask for other’s opinions, at least have an open mind to accept them.

Seriously, how many times have I had a plan for my home decor that I never followed through on? SO. MANY. Why? I’m not talking about knocking down walls. I’m talking about things like throw pillows, curtains, and paint colours. What is the worst that could happen? In 6 months, I might be tired of it already and looking for a change. So what?

I get it. Some things are bigger. They may require loads of money or huge lifestyle changes. But even in those cases I apply the “so what?” principle to it. Sometimes though, the obstacles you perceive aren’t quite as large as you may think.

6. Break it down into smaller chunks.

Okay, let’s say the obstacles are pretty darn big after all. I had a dream of being a ballerina. The problem was that I’ve never had the body of a ballerina. To put it bluntly, my bust was too big. When I went through the possibilities, I knew that I could make some truly drastic changes for that goal. I could have breast reduction surgery. I could try going on a crash diet and starving myself. That’s when I realized that I didn’t want it badly enough to risk my health for it. Instead, I joined a “ballet for everyone” class. For 2 hours a week I got to live the life of a ballerina and it turned out, that was enough for me.

I’ve always had a dream of being a published author. I still do. I may never write a New York Times bestseller but in the meantime, I still write. I work on my novel every week bit by bit. And I put my writing skills and passion to work here on my blog. Instead of overthinking my goal and all of the obstacles in my way, I scaled it down to something manageable while still working my ultimate plan in the background.

It’s great to have high standards for yourself but they still need to be achievable. Measure success as giving it your best instead of comparing it to others. You aren’t meant to walk their path. You have one of your own. Rock that path with all you’ve got.

8. Focus more on the present.

You don’t know what the future is going to bring. Stop worrying about what might happen and what might have been. There are many things in this life that are completely out of our control. That doesn’t mean we just give up and wait to see what happens. But grabbing every bit of joy you can in the present while rolling with the changes that come your way is a great way to make the most of your life and your dreams

Sometimes we just need a good old-fashioned kick in the behind from someone who can be kind but completely honest with us. It’s easy to make excuses for not moving forward with a project. We may call them roadblocks and we may think them insurmountable but often, they are simply excuses. Talking them through with someone else can often be the eye-opener you need. Find someone who will be tough (but not mean) with you. I have a friend who will say things like, “We’ve talked this through before. I don’t think you should waste anymore energy on it. Just make a decision to move forward with it or not.” I need to hear that sometimes.

Ending overthinking is not always easy. It can become a habit and now you need other habits to replace it with. The first step is to stay alert for any time you begin over-analyzing things. Stop yourself. Instead of allowing yourself to fall into old patterns, try something new.