You are here: Home / CELEBRATE / What is Shrove Tuesday All About Anyway?

Today is Shrove Tuesday!  Or as my daughter calls it, Happy Pancake Day!  Perhaps you call it Mardi Gras instead!   Or maybe Fat Tuesday?  Whatever you call it, it sure can be fun to celebrate it! 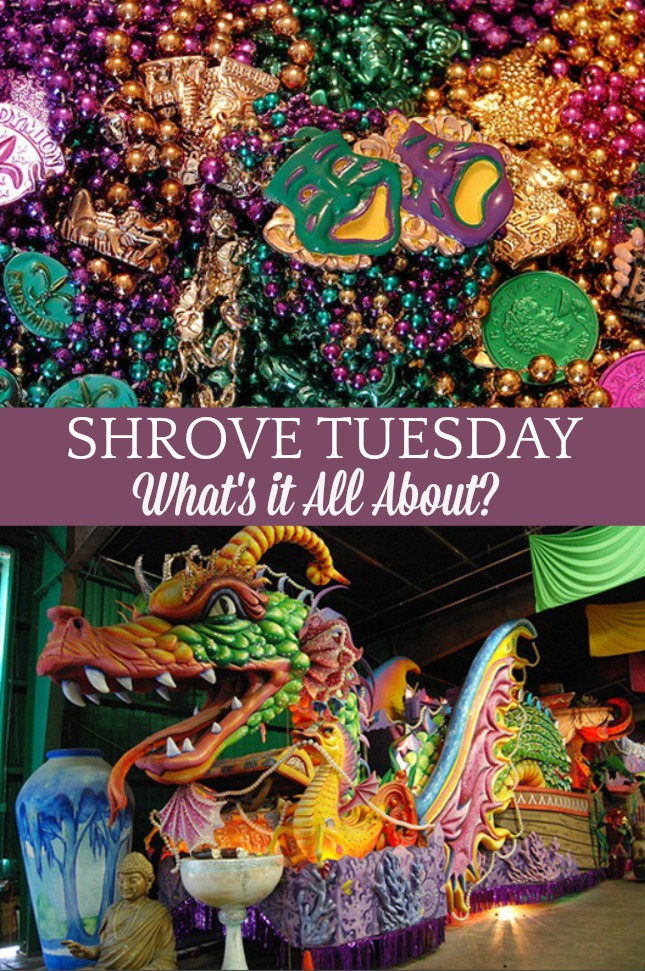 Shrove Tuesday is the day before Ash Wednesday

This signifies the beginning of the Lenten season. Shrove Tuesday can take place anywhere between February 3rd and March 9th.  Its actual date each year is dependent on the lunar calendar. It is always 47 days before Easter. Because Lent is a time of sacrifice, which in the past included giving up meat, fat, eggs, and dairy, the idea behind Shrove Tuesday is to have a big feast.

There are several reasons behind this:

The term Shrove is derived from the English term “to shrive” which means to hear confessions.

It was common in the past for parishioners to go to confession just prior to Lent beginning. In my church, Holy Week (the week from Palm Sunday to Easter) is filled with many many extra confession times so we can unburden ourselves and face Easter freely.

In many places, it is traditional to accompany the cleansing of the soul found in confession with a housecleaning as well. This is where the tradition of spring cleaning came from. People went to confession first to clean their souls, then cleaned their kitchens. They removed all the forbidden food items from it as the first step and finally cleaned the rest of their homes.

In the Ukraine, houses were even whitewashed both inside and out at this time of year. The idea is the same as the that of going to confession – to clean away any impurities to prepare for Easter, a time of rebirth and salvation.

As with many Christian holidays, Mardi Gras has roots back to ancient times as well.

In Ancient Rome, a festival known as Lupercalia (also known as Februa for which the month of February was named) was held around February 15th. In it, the god Lupercus (god of agriculture and fertililty) was honoured and appeased in hopes for a fruitful planting season.

The ideas of “spring cleaning” were present in this celebration as homes and cities were cleaned and purified to ward off evil spirits. This festival was very much a carnival atmosphere and involved feasting, drinking, dancing, and so on.  Many of these customs were then incorporated into the celebration of Mardi Gras.

The colours of Mardi Gras are purple which symbolizes God’s justice, green which is representative of faith, and gold which reminds us of God’s power.

The flamboyant costumes that most of us think of when we picture Mardi Gras celebrations such as those that take place in New Orleans, as with the feasting, are meant to be over-the-top because again, they are supposed to show a strong contrast to the time of penance and sacrifice of the Lenten season.

Masks are usually worn. I have never found a specific explanation behind them, I think of them as symbolizing the masks that we often wear in our lives. I think of the need to strip away those masks and work to improve ourselves as we are encouraged to do during Lent. The costumes, along with the traditional beads thrown from floats and balconies in New Orleans, are often made in these purple, green, and gold colours.

The custom of throwing beads and trinkets from the parade floats is thought to have its roots in several  places. One is that there as a Renaissance tradition of having lords and ladies throwing mead and ale at those in attendance at parties. The other is the Pagan tradition of throwing grains at their fields each spring to thank the gods for making it through the long hard winter.

They are essentially large cinnamon rolls or brioches decorated with purple, green, and gold icing and/or sprinkles. Often, you can find these cakes with various fillings in them as well. The cakes were originally made round to depict the route taken by the Wise Men – a circular route that would confuse King Herod as he tried to follow them.

Since Mardi Gras is seen as beginning on Epiphany,  there is a small plastic baby figurine hidden inside the King’s Cakes. This is to symbolize Baby Jesus. It is considered very good luck to find the figure.. The person who finds do so is designated as the King of Mardi Gras and the host of the next party.   If you’d like to try making them from scratch, here is a recipe for King’s Cakes.

What are you doing to mark Shrove Tuesday?