You are here: Home / Charity / Emergency Situation in the Philippines – YOU Can Help! 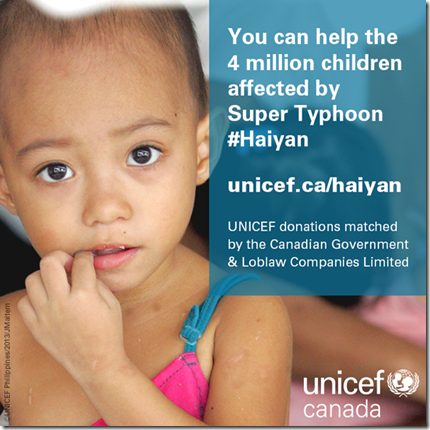 DONATE NOW AND TRIPLE YOUR IMPACT!

I’m sure you’ve all seen the news.  Last Friday, one of the largest typhoons on record tore through the Philippines, leaving massive destruction and tragedy in its wake. Buildings were completely destroyed or washed away, trees were uprooted, winds of up to 275 km/h were reported.  One coastal town is reporting 10.000 deaths in that town alone and it is estimated that up to 4 million children live in the areas that were hit by this Super Typhoon.

Currently, hundreds of thousands of residents in Vietnam have been evacuated as they prepare for this typhoon to head their way. This comes in the wake of a 7.2 magnitude earthquake that hit the same area leaving people homeless, living in make-shift tents. .UNICEF was already preparing in advance of the typhoon hitting to get supplies, staff, and other resources ready to head to the area as soon as they could.  UNICEF’s first priorities are to make sure every child has access to clean drinking water, essential medicines and emergency nutritional supplements  But they can’t do this without our help and every second matters.

Due to the support of the Government of Canada and Loblaw Companies Limited, every donation you make up to $25,000 between now and December 8, 2013 will be TRIPLED.  I’ve made my donation – will you join me?