You are here: Home / CELEBRATE / Dear Cyndi, There is a Santa Claus 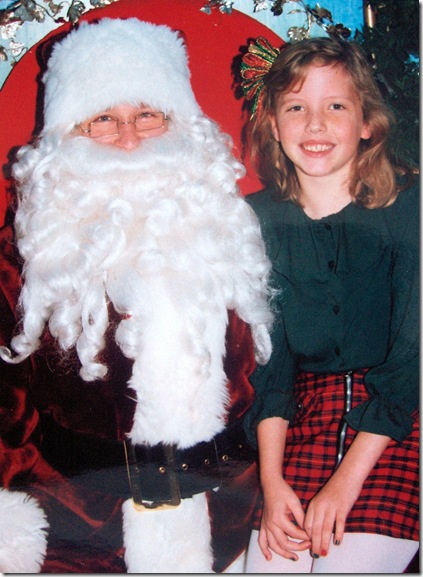 Years ago when I was….oh I don’t know maybe 9 or 10 years old….I wrote a letter to my parents and shoved it under their bedroom door one night. It said that I had heard that Santa wasn’t real. that they were the ones who actually put those gifts under my tree, and that I didn’t need all those extra Santa gifts anymore because I was too grown up to believe in all that.

When I was a classroom teacher teaching grade 8, I would say something about Santa in front of my students and they would laugh and laugh. For our Christmas party, I would wear my “I believe in Santa Claus” hat and still more giggles. I would read them The Polar Express, we’d watch Miracle on 34th Street, and we’d learn about St. Nicholas in religion class. Even my daughter would chuckle at me as I’d remind her to write her letter to Santa (well into her teens and 20s) but I’d always respond with “I believe in Santa Claus. And one day, you’ll believe again too”.

You see, it turned out that the letter I wrote to my parents saying I didn’t believe in Santa anymore actually made me believe in him even more than before. Or I should say, it was the reply letter written to me by my dad that made me know that Santa Claus is very very real and I will hold that belief in my heart until the day I die. Here’s what he wrote:

Dear Cyndi (well actually he spelled it Cindy but then I decided that was boring and changed it when I was a teenager),

I know that you’re very grown up now and so you want to know all the answers but you’re wrong when you say there is no Santa Claus. There is a Santa and he lives in each and every one of us. Santa is love. He is generosity. He is hope. He is joy. He is the magic of Christmas.

The most important part of Christmas is celebrating Jesus’ birth and what it meant to the world. Jesus came to bring us God’s love and teach us to share it with one another. And that’s exactly what Santa’s job is. He reminds us to love each other, to spend time with each other, and to give generously to others.

Jesus isn’t physically present here on earth at this moment and so God relies on all of us to BE God to each other. We are Santa to each other too. When we become adults and have children, we embrace the spirit of Santa that lives in our hearts and we do the work of picking out, buying, and wrapping gifts in his name to carry on sharing that love and generosity with our children. That’s what Santa is all about – the spirit of giving and of loving.

So, even though you may not see Santa as one actual person in a red suit who travels around the world in a sleigh pulled by reindeer anymore, I want you to keep believing in the Santa that lives in us all.