You are here: Home / CREATE / Baby Clothing Bouquets and Diaper Cakes
Baby Clothing Bouquet
My nephew and his lovely wife just had their second baby in June.  Callie is, like her brother, an absolute delight.  I found some adorable ideas for crafts that I could make in celebration of her birth.  One of the things I made was a baby clothing bouquet.  It’s a really cute idea that I don’t honestly feel I executed as well as it could have been done, I think because perhaps some of the articles of clothing I used were a tad too big for this project.  It was much easier to roll and fold the smaller clothing items into something that really resembled a rosebud. 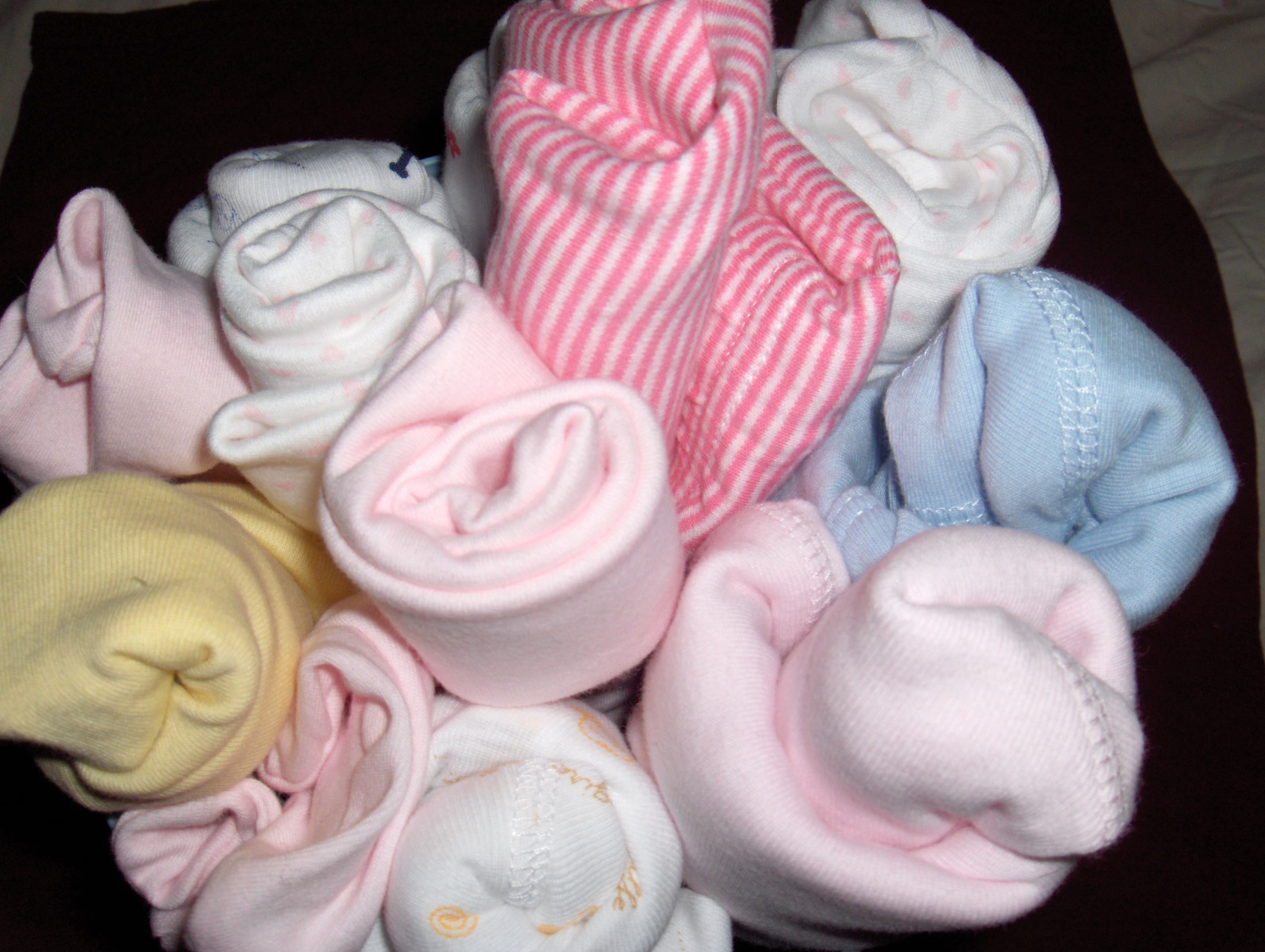 1) Articles of baby clothing…the little “skull caps”, socks, booties (not too thick), bibs, t-shirts, and onesies work pretty well.  I also had some dresses and some two piece pajama sets that I used as well but like I said, it’s a bit more difficult to form the flowers out of the larger clothing items.  I will give you a bit of a hint for working with the larger items though when it comes to creating slightly different flowers out of them.
2) The original “recipe” that I had for this called for floral tape but I preferred to use rubber bands.  I found that if I had wanted to use the floral tape, I would have needed an extra set of hands to help me out.  That being said, it’s important to note that I do have one hand that doesn’t have the best coordination and mobility to because it was injured in a car accident so I can be a bit “all thumbs” at times when more intricate work.  You may find the floral tape works just fine for you!
3) The instructions I found for this project also called for wire.  They wired the buds together to form the bouquet but I didn’t find that gave enough stability to them.  I preferred to use either chopsticks or wooden skewers based on what I had on hand at home and based on the size/weight of the articles (using chopsticks for the larger, heavier pieces and skewers for the smaller, lighter ones).
4)  You might also want some artificial flowers or tissue paper to make some paper flowers out of as this can fill in any gaps in the bouquet and round it out.  I didn’t need that as I had PLENTY of clothing to fill the container.
5)  Some artificial leaves or ones that you cut yourself out of paper can also be a nice way to round out the bouquet and to add some additional colour and texture to it.  It just makes it look more like an actual bouquet of flowers!
6)  You either need some tissue paper and ribbon so that you can create a bouquet and use these to wrap it in (for presentation much like the bouquets that are given out for example at the end of a performance) OR you need some sort of pail/vase type item to put it in.  I put my bouquet into a small trashcan – a) I wanted something that would be useful even after the bouquet was gone and b) I found a cute little trashcan in appropriate colours with butterflies on it (butterflies are the theme of the baby’s nursery).  I crumpled some tissue paper up and put one of the larger baby blankets I had in the  bottom of it to keep the bouquet in place better (tissue paper alone would have worked just fine…I just needed a place for that blanket anyway). 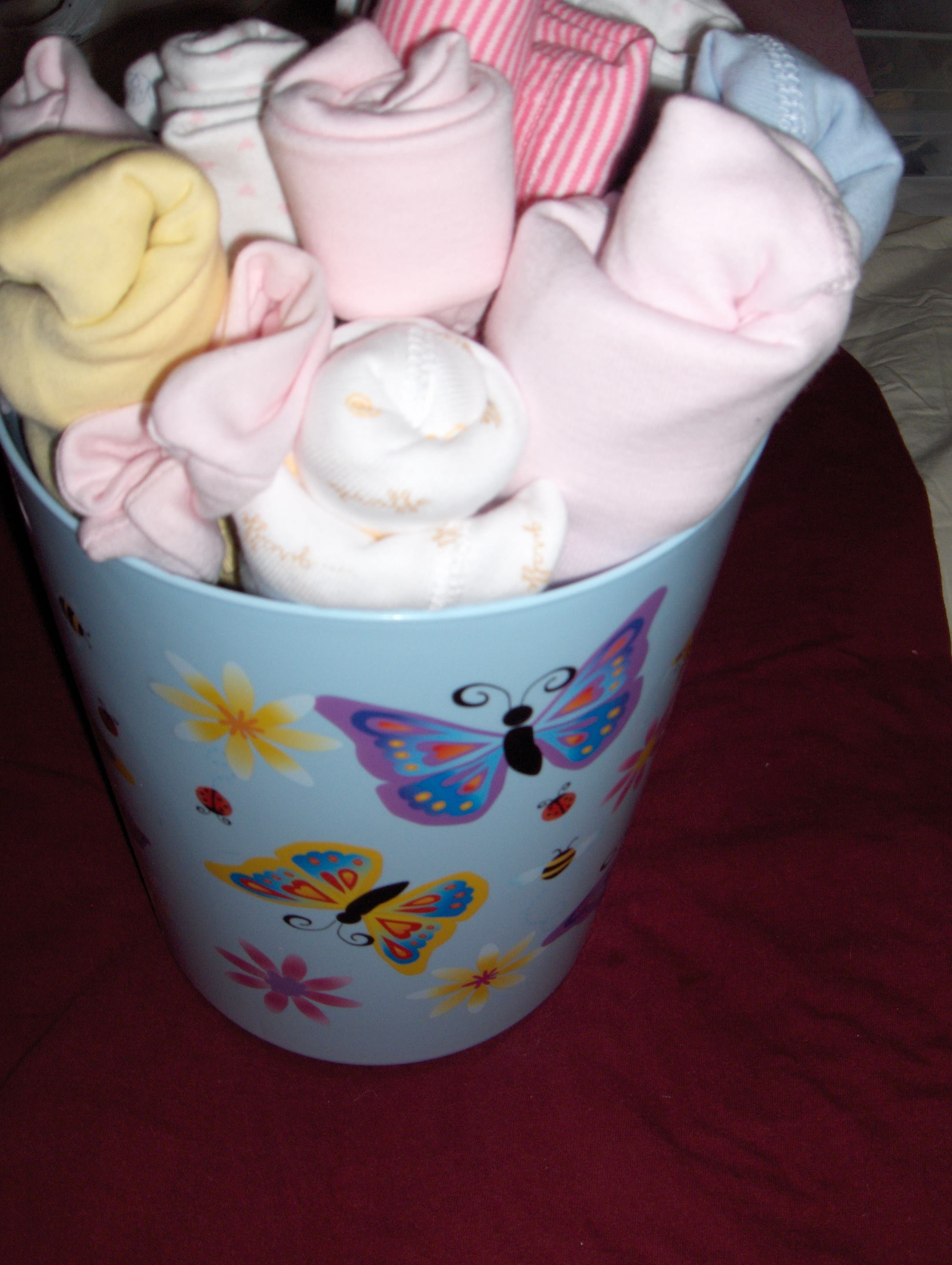 Directions: Lay out each item one at a time or in the case of tiny items like the socks you may find that using both in a pair, laying them on top of each other, will fill out the bud better.  With some of the larger items like the hat, bib, or t-shirt, I found it was better to lay them out and then fold in parts of them to create a rectangle.
For example, in the case of the t-shirt, fold each of the sleeves in so that you have a large rectangle formed.  Then, you may also need to fold it in half or thirds to make a smaller rectangle that is more appropriately sized for the rose buds you are trying to make.
With each of the clothing pieces, you want to begin rolling from one end until you have basically rolled it into a sausage shape.  The instructions I had suggested tapering and spiralling it as you roll but my ability to do this varied according to the thickness of the material.  Sometimes trying to roll and taper it was really tricky if it was really thick so in those cases I simply rolled them up and didn’t really spiral them at all.  However, once I formed those buds, then I would use my fingers to pull some of the folds open slightly and “fluff” them out a bit.
With the really large items I had (which even included some of the smaller thinner receiving blankets), I found that trying to roll them into a bud was only making me want to tear out my hair!  So, instead, I decided to resort to the tissue paper flower making technique I learned to do as a child.  Remember those?  Fold in the necessary parts of piece of clothing to make a rectangle as before but then fold it back and forth in an accordion fold.  Once it’s all folded, you take the strip you have there, fold it in half and secure at the fold.  Use your fingers to pull each of the layers apart one by one and fluff out into more of an open rose shape (as opposed to the buds you were making before).
Once you have created a bud or open flower, secure each at the bottom of the flower with a rubber band.  I then poked the stick I was using for each flower up into that part where it was secured and used the rubber band to hold it into place.
Crumple up tissue paper, use floral foam, or put baby blankets into the bottom of the container you are using and then arrange the flowers in it to make a pretty bouquet!

The cake I made!…no diapers were harmed in the making of this cake!

I had seen pictures of these online but didn’t actually have any instructions in front of me when I started making it.  I thought I could figure out how it was done without needing a tutorial.  I did okay but once I got going, it started getting a bit unwieldy and I found instructions online and adjusted what I was doing.  I used an entire package of Huggies diapers.  We tend to have large babies in my family so I chose not to use the Newborn size as those only go up to 10 pounds.  Instead I used the next size up which in the case of Huggies is called size 1 and they go up to 14 lbs.  There were 66 diapers in the package.