You are here: Home / COOK / A Week of Halloween Foods 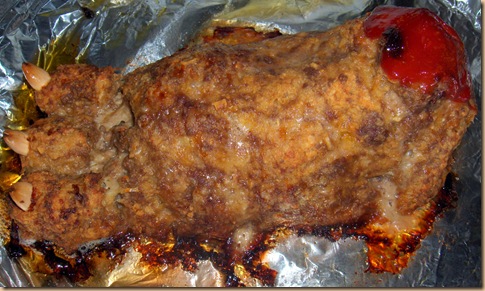 (using healthier ingredients to make this fun and better for you at the same time!)

Instructions:  Note:  This makes one foot.  Since I was only making it for myself I just made one (and even then had plenty of leftovers!) but if you double the recipe, you can make two feet, enough for the whole family! Simply combine all the ingredients (except the almonds) until mixed.  Don’t overmix or you can make the meatloaf tough.  I began by shaping most of the meat into an oval and then working it up at one end so that it was a bit higher than the other, resembling where the foot had been severed at the ankle.  I took a small bit of the meat and formed some small balls and placed them at the other end to be the toes.  Stick an almond into each toe as the toenails.  I used some extra ketchup as a glaze on top of the cut ankle to look like blood.  Bake in a 350 degree F oven for about 45-55 minutes, until golden brown on the outside and thoroughly cooked, to an internal temperature of 160 degrees F on a meat thermometer.